It drives me crazy to see news outlets with US maps showing the states estimated to be either going for Barack Obama or Mitt Romney in the 2012 presidential election based on the geographic size of those states, rather than the number of Electoral College votes they carry. There are better maps they could and should use. Below, a guide to some you should check out.

I’m not a fan of the Electoral College system, where a US presidential candidate can potentially win (and some have) even though a majority of people vote for the loser. That just seems wrong. I also dislike that despite living in a populous state, because California’s typically seen as safe for Democrats, we’re largely written off — as are most other states deemed in one camp or the other. Only the few “swing” states get attention.

Still, that’s the current system. If we have to have that system, let’s at least have our TV news channels and publications show maps that represent correctly. A map of votes based on geography sure isn’t doing the job.

Consider this map at CNN, which is similar to what you’ll see aired on CNN and other news channels: 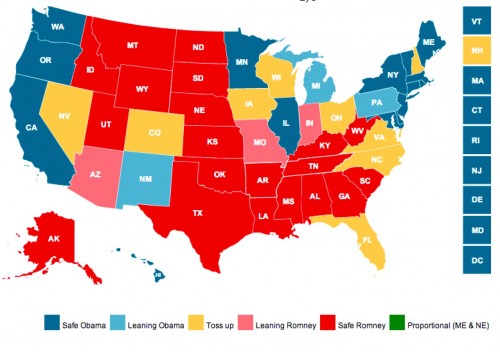 That makes it seem as if support of Romney is sweeping across the nation. Look at all that red! Victory is assured. The problem is that many of those red states are geographically large but small in the number of electoral college votes they carry. Meanwhile, some small states such as those in New England carry more more votes than their geographic size suggests.

Now consider this, from the New York Times: 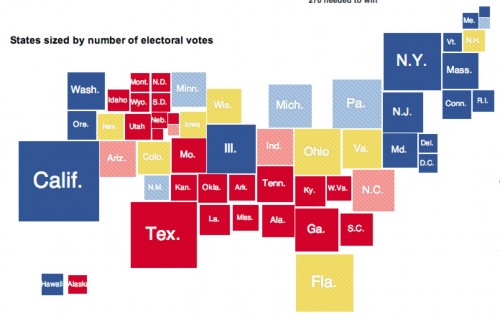 That’s a map of the US that more accurately reflects what’s happening in the election, because rather than being drawn to geographic size, it’s showing voting size. States are illustrated in proportion to each other based on the number of Electoral College votes they have. Done this way, the election is more accurately seen as very close.

Maps that aren’t based on geography are called “cartograms” and can be done in various ways. Here’s another example from the Huffington Post, which I especially like: 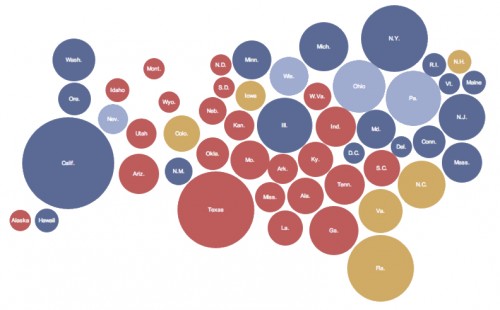 Time has a hybrid of the above model, if when using its map, you’re select the “Electoral vote” option:

Still want a better sense of the traditional US shape? Princeton offers once based on combined polling data plotted into a weighted map:

If you like that, then definitely check out the 2012 Electoral College Calculator blog which takes estimates from various sources done on traditional maps and applies them to ones reflecting votes: 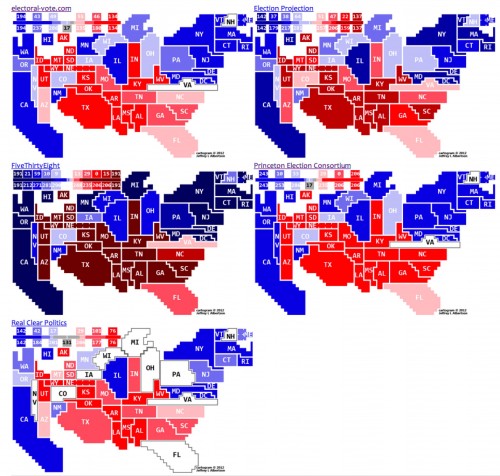 That blog is run by Jeffrey Albertson, who wrote a great post on various ways to better map electoral votes for Daily Kos earlier this year, including some of the examples I’ve listed above.

Also see this article that talks about ways to produce these types of cartograms with yet another variation: 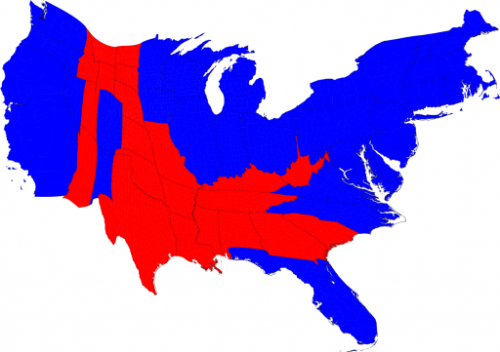 That’s the 2008 presidential vote. Personally, I don’t like this particular style, because I feel it’s too close to a geographic map. Rather than break me out of a geographic mindset, I keep looking at it feeling it’s wrong because it’s so close to being “right.”

Here’s hoping that CNN might decide there’s a place for cartograms among its holograms and other whiz-bang tech that it’s currently using for the US presidential elections. The same is true for any news outlet. Give us a map that’s a true guide to votes, not to geography. After all, that’s what you’re trying to map out.