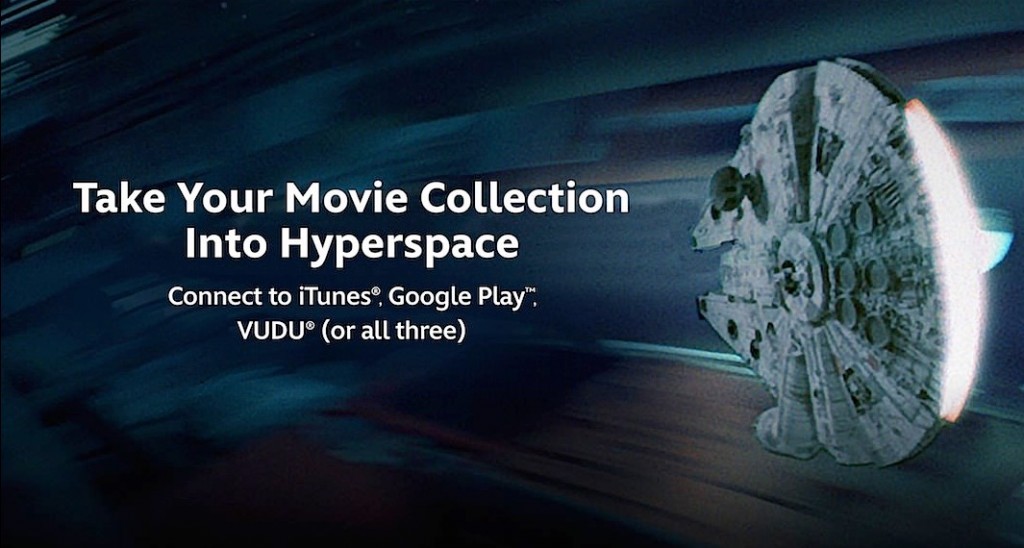 There seems to be no lack of providers offering bundles of the six films in the series for $90 or $100. Amazon and M-Go, for example, both sent emails today encouraging me to buy.

Neither of those are appealing to me, because going with them means you’re stuck within only their ecosystems of device support. While both offer a wide-range of support, going with Apple iTunes, Google Play or Vudu is better because they mean you’re effectively getting a four-for-one option.

Buy One Place; Get It In Four

The reason for this is Disney, which has some rights to five of the six films. This means that if you buy from one of its Disney Movies Anywhere partners (the aforementioned iTunes, Google Play and Vudu), your rights flow through Disney to all its other partners. Plus, you can also watch through Disney Movies Anywhere itself — giving you four providers to choose from.

Consider my case. I purchased the bundle through Google Play for $90 (OK, $89.99) and had all six films show up for me within my Google Play account (the extras were also included): 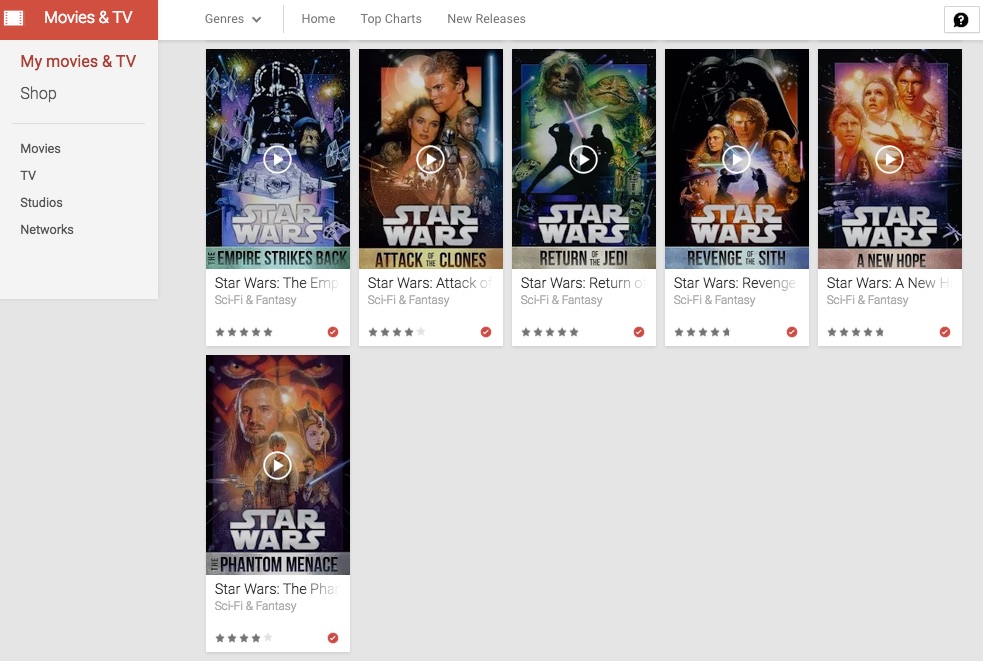 In turn, since my Google Play account is linked to my Disney Movies Anywhere account, they also turned up there (along with the extras):

Actually, if you look closely, you’ll notice only five of the six Star Wars films are listed. That’s because Disney doesn’t own the full rights to these films. 20th Century Fox still does. Disney gets the rights to five of them in 2020; as for the original and best one — “Star Wars: A New Hope” — 20th Century Fox owns that forever. Yeah, really.

Clearly, Disney and Fox struck some deal so that the films could be released digitally and so that five of six have Disney Movies Anywhere support. As for the sixth, Disney notes on its support page that it’s not available because “Twentieth Century Fox owns the rights to this movie.”

Purchases Appearing At Other Providers

Still, five out of six is pretty nice in terms of how a purchase from one provider flows through to others. Once Disney Movies Anywhere registered my Google Play purchase, I then checked my Vudu account and found all five of my films (with extras) were also listed there: 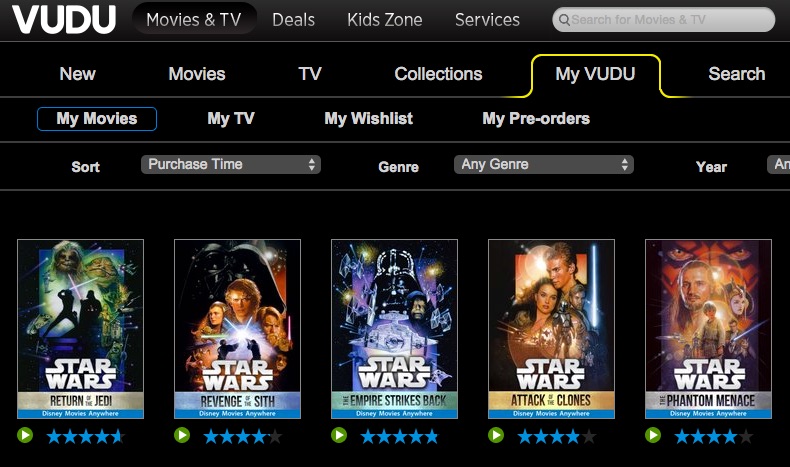 I didn’t have to do anything special. My Vudu account had been previous linked to Disney Movies Anywhere. Within a minute or two after my purchase on Google Play, there were the films, also viewable through Vudu.

Over on iTunes, the films also appeared, along with the extras:

I did have to follow the first set of instructions on Disney’s support page to make this happen; that was pretty painless.

How This Avoids Provider Limitations

By going with one of the Disney Movies Anywhere providers, you’re able to overcome some of the limitations each provider has. For example:

These types of issues used to drive me nuts when I’d consider buying a film digitally. I once even made an entire comparison chart to track how trapped movies and TV shows we buy are, depending on platform. But with Disney Movies Anywhere, go with with any of the participating services, and you pick up three other choices for nothing. With all of them combined, you should find plenty of freedom to view your films.

Do think carefully about where you plan to watch Star Wars: A New Hope, however. If you really like the idea of viewing that as an iTunes download (as opposed to using the Google Play or Vudu apps for iOS), you’ll need to make iTunes your provider. But if you do that, you then lock that film only to the Apple ecosystem, since Apple doesn’t make iTunes films available for non-Apple tablets or phones.

Finally, I was a bit bummed that there wasn’t yet a Blu-ray / Digital Download combo package out. I like having the actual physical media because unlike with the digital copies, providers can’t suddenly take your rights away.

I suspect we’ll see this come eventually. Plus, we might even see the Vudu Disc-To-Digital service get support, so that you could upgrade existing DVD or Blu-ray copies you have to a digital download. Of course, there’s no guarantee either will happen, but it would be nice.