Dear non-Californians upset that California re-elected a Democratic senator, elected a Democratic governor and is otherwise doing things you might not like. Tough shit. OK, that’s my initial reaction to some things I’ve read recently. My more thoughtful reaction is scapegoating one state isn’t the answer to America’s issues.

Last week, the LA Times featured letters from non-Californians upset with the way we do things in my native state. Today, someone named Allysia Finley (no real idea who she is or her background, sorry — googling her isn’t much help) chimes in with a Wall Street Journal opinion piece with a nice linkbaiting headline calling California the “Lindsay Lohan” of states.

How about a little perspective. It’s easy to write the state off as nuts, if you assume that it is the lone nut among the other 48 states, which is what Finley does in her opening (New York gets excluded):

The other 48 states—your cousin New York excluded—are sick of your bratty arrogance. You’re the Lindsay Lohan of states: a prima donna who once showed some talent but is now too wasted to do anything with it.

Flip it around from a population perspective. California, with 37 million people, represents 12% of the entire country. Now it’s no longer that the state is some type of odd outlier going against the other 48. It’s a double-digit percentage. Add in New York, and you’re getting up to 18% of the population.

But hey, that’s still not the majority — plus, not everyone in California voted the same way. Sure — and not everyone in all the other states votes the way Finley probably assumes they should, either.

Note to those from Wyoming — I’m not saying that your senators have done this. I haven’t even looked, and I mean no offense. You’re just the smallest population, so I’m pulling you as an example.

Personally, I wonder if California might be in a better place now, along with the entire United States, if way back in 2000, the strange election system in one state — Florida — hadn’t caused George W. Bush to gain office and oversee the launching of two different wars. Aside from the tragic loss of life, there’s the huge amount of wealth that has flowed out of the country as part of this.

Perhaps some of that wealth might have been used to help the country recover from the financial meltdown that happened under the watch of that same president? Or perhaps someone else might have helped prevent that before it started?

I have no idea if California, over its time as a state in the union, has contributed more or less to the United States as a whole. At some times, it has almost certainly contributed more (consider, if only, the huge amount of legal immigration from other states California has received, people leaving those other states looking for jobs and new opportunities). Maybe at times, it will have contributed less. The same, almost certainly, can be said for any other state in the union.

What the US doesn’t need, right now, is a campaign to somehow scapegoat one particular state as a supposed barrier to progress. It certainly doesn’t need someone suggesting that a state can’t elect its own internal and federal leaders in the way it wants. What it needs is more cooperation. Scapegoating and fearmongering is easy. Compromise and admitting that one view doesn’t fit all is much harder.

As for the crash-and-burn assumption that Finley makes — and her prediction that the state will need a federal bailout — I can’t evaluate that. Her piece tosses a lot of allegations without any real analysis behind it. I’m sure others on both “sides” of the political spectrum will argue both ways. Time will tell.

There’s no doubt California has problems, just as Lindsay Lohan does. But people overcome their problems and go on to success — hence my proposition that California may be more like Robert Downey Jr — heading into recovery and regaining its former success.

Postscript: I’ve now found some figures that are interesting reading:

State budget issues, 2009-2010: From the Sunshine Review, an easy way to see estimated budget shortfalls for each state. California has by far the biggest shortfall for the two fiscal years listed ($20 to $40 billion). But as a percentage of the general fund budget (19%) , it is not out of line with other places like South Carolina (18%) and below places like Alaska (21%) or Arizona (24%). That page also lists stimulus money received by each state on a per capita basis. California is down around 26th with $31 per person. States like Alaska ($379 per person) or Washington ($339 per person) or Idaho ($314 per person) were well above in this type of “bailout” fund.

Federal Taxes Paid vs. Spending Received by State from the Tax Foundation shows federal taxes paid by each state versus amount received from 1981 through 2005. The last time California received more from the federal government than it gave was 1985 ($1.03 for every $1.00 spent, and it was never higher than $1.08). For the last year on the chart, it was $0.78 received for every $1 spent. In contrast, a state like Tennessee received $1.27 for the last year and was always above for every year on the chart. Utah was always up. West Virginia, in the last year, was getting $1.76 back for each $1 spent. This chart has full rankings for 2005 — top was New Mexico ($2.03 per each dollar spent) versus California, which at $0.78 was 43 on the list.

Via the Don’t Mess With Taxes blog, I came across the US Census publication, Fiscal Aid To States for Fiscal Year 2009 (PDF) that was published this past August. Here’s a picture of who gets the most federal money — the darker the color, the more they get. I guess you could call those the Lindsay Lohan states: 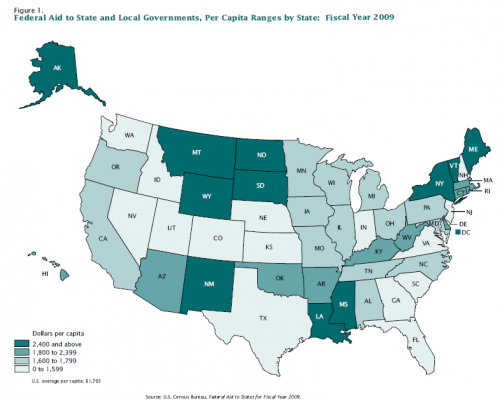 As you can see, California is at the low end of money received on a per capita basis.

Here’s another chart rank ordering the states that get the most, plus showing what they get money for:

The Christian Science Monitor has its own top ten list of which states get the most money per person from earlier this year. States like Vermont (lots of Medicaid spending) and Alaska (lots of transportation spending) led the list. New York and Massachusetts came next, again with Medicaid or programs to help the poor causing the spending. Louisiana was 6th, with money spent to help the state recover from Katrina (anyone want to complain about the rest of the US paying for that that “bailout?” Because I sure don’t). Tennessee came 7th with high Medicaid spending, followed by Maine, New Mexico and Mississippi.

The Daily Beast did a “hypocritical states” view of the data, looking at where Tea Party support is strong (and often against government spending) with which states get the most spending. California was 33rd on the list of those getting the most federal funds per person.