In case you missed it, a British professor found himself wrestled to the ground after jaywalking in Atlanta last week. It brought a giant smile to my face to read this, not because of the thought of this man being accosted in this way. Rather, it’s because I know from personal experience that Brits don’t […]
Despite living 10 years in Britain, I pretty much haven’t lost my American — Californian — accent. Sure, if I haven’t been back to the US for a month or two, I’ll have a bit of a lilt, in particular going up with my voice at the end of sentences. That goes away after a […]
It’s the Fourth of July tomorrow, and yes — I celebrate it despite being in Britain. In fact, we’ll have our annual party tomorrow with neighbors and friends coming over. But before that tradition, I’m in the midst of another one, reading various books about the 4th of July and America to the kids. Sam […]
It’s that time of the year again, a favorite time for any US expatriate — the time to ensure you’ve filed the absurd TD F 90-22.1 Report Of Foreign Bank And Financial Accounts form. It’s a huge waste of time, but one expats are forced to endure or face a fine of up to $500,000 […]
I was in Canada last week and had an interesting talk with my cab driver on the way back to the airport about immigration and integration of different cultures. His key misconception was over the idea that America is all about the “melting pot,” where all cultures are mixed together into one. I got the […] 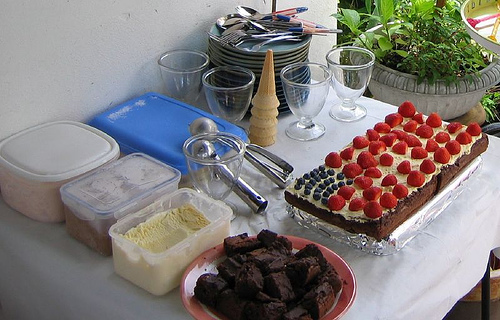 I’m a member of American Citizens Abroad, which is a non-profit group designed to help represent the interests of Americans who live outside the United States. Someday I’ll dive in deeper on our many issues, such as how we don’t get counted by the census and how we are a bigger voting block than some states, with our own […]
So Sir Elton John ties the knot now that same sex marriages — or civil partnerships — are allowed in the United Kingdom. Good for him and his partner, and I only hope we’ll see the same finally come to the US. I’ve got several very close friends who are gay, including one who is […]
One of tonight’s bedtime books was You Wouldn’t Want to Be an American Pioneer! This was another great find I came across on a trip back home recently. It’s both well illustrated and chock full of information on what it was like to cross the country back in the 1800s. The kids especially like the […]
While the rest of the UK may be going along like normal, Thanksgiving is coming up in our household and the Thanksgiving books are coming out for the kids, our boys aged 6 and 4. I picked up a great new one while back in California in October, Thank You, Sarah. It tells the story about […]
Whenever I’m back home in the US, I’m always grabbing books about the nation to help the kids learn more about their American side. One of my favorite books is Laurie Keller’s The Scrambled States of America, which I just read to them again today. In it, Kansas decides he’d like to meet some other […]
« Previous Page