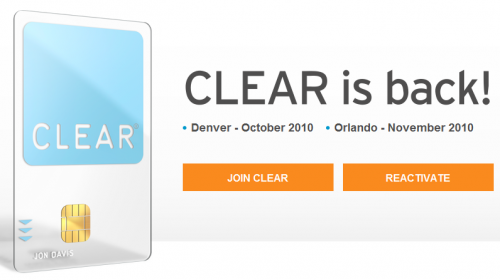 The Clear airport security system that closed last year is back up and running at a new web site and under new ownership. Plus, it promises to honor the membership terms remaining for any previous members at the time the old program closed. That’s the good news. Bad? Clear still stupidly requires biometric registration for no good reason, offers support at a greatly reduced number of airports and might not recognize that you had an account in the past.

Previously at flyclear.com, Clear now operates at clearme.com (but the old domain will redirect you to the new location). It promises that Clear lanes will begin again at:

The prior Clear program offered support for these airports:

So, that 2 airports down, 19 more to go to get back to where Clear was.

Oddly, Clear’s still going with cards that require people to log biometrics — taking your fingerprints and scanning your eyes. If you were never in Clear before, you can only do this at the two airports where Clear operates. And what do you get after all this work? The ability to walk to the front of the security line.

Well heck, I do that already using my Southwest A-List card, using Southwest’s Fly By lanes. I didn’t have to have my eyes scanned, my fingerprints taken. I didn’t have to bring two different forms of photo ID. Nor do I have to use slow, inconvenient fingerprint scanning devices before I can even go through the express security lane.

Nah, I just had to fly Southwest a lot. Lots of other frequent flyers have this option, too.

If you don’t fly a lot, and you use the specific Clear airports now, then paying for one of the new cards and going through the registration hassle might make sense. But I have to wonder why the new Clear just didn’t ditch the entire biometric aspect.

Not Security Bypass, Just Front Of The Line Service

The old system had all this because it was supposed to let you BYPASS security, not just take you to the front of the line. That never happened. The new system doesn’t seem like it had to do what the old one did (which in turn, came through a TSA program). It seems like the new Clear just could have negotiated special express lines with each airport just as the airlines do — lines that that you to the front of the security line, but not around it.

If you had a card, sure, why not renew. But don’t be surprised if the Clear site doesn’t recognize you. I tried to reregistered, and if failed to find me.

After calling Clear, I learned that not everyone has been uploaded into the database. When you are, you’re supposed to get an email and/or a printed letter telling you to re-register.

There’s nothing on the Clear site that explains this. The phone rep seem surprised I knew about the Clear site reopening, and that officially, it wasn’t supposed to be out there. Well officially, Clear tweeted about it earlier this month. So officially, there ought to be some more explanation and help about who can and can’t yet re-register on the site itself.

I’ll also be curious if Clear really will honor the rest of my term. I’d referred so many people to Clear through a program that gave them and me an extra month of membership that my card was good through 2064.

For past posts from me about Clear, see my category about the service. And thanks to Mark Rosch for the tip on Clear being back.

I just had a call from Clear’s new CEO, Caryn Seidman-Becker, who talked to me a bit more about the system and answered some questions I had. Talk about fast and high level response!

On the limited number of airports, she said “you’ve got to walk before you run,” and that Clear fully intends to expand. She said enrollment is faster than in the past and that the number of enrollment stations would expand.

Why go the biometric route? Clear is building a biometric security company, one that might allow those with verified security cards to bypass or speed through security on cruise ships, with companies and other places. “If you just buy a lane at an airport, you can’t do that,” she said.

She asked what I liked and disliked about the old service. Well, I loved getting to security faster. But I hated that to do this, I was taken through the regular security line, with people sometimes literally pushed out of the way. In contrast, most airports I’ve been to have separate express lines for those airline frequent flyer cards that allow access.

Good news, there — Seidman-Becker said that Clear will be getting its own dedicated lanes.

I also said that I hated having to scan my fingerprints just to be taken to the front of the line, where I still would have my security checked — something unnecessary when I use my Southwest card. She pointed out that Clear actually took me past security.

Indeed, I’d forgotten this. You would be escorted past  the TSA agent who normally checks your ID and ticket and be delivered to the x-ray line. That definitely saved time, in some cases.

Still, I pushed that many people would be happy just with a network of express lanes, that maybe building those out would be a form of “walking first,” with biometics stations coming next.

Another thing I liked about the old Clear is that I didn’t have a frequent flyer card with enough status to let me use the special airline lanes at the time, so this was a great options (more of these lines also seem to have appeared since Clear went away).

There’s no doubt that Clear potentially offers people an easy network for speeding through security, if it grows. And the company deserves kudos for its pledge to honor all remaining time on anyone’s membership. Yes, Seidman-Becker said, my membership through 2064 will stay intact.

It’s still a tough sell for someone new at $179 per year, I’d say. If you are using one of the existing airports often, and you don’t have alternative to speed through security, then the new Clear is worth considering. If not, I think it’s still wait-and-see time, until the airports expand.

By the way, here’s an article from the New York Times in April, about the new company.