Rupert, my son had a simple request. “Daddy, can we watch last week’s episode of The Simpsons?” No, son, we can’t. You can blame Rupert Murdoch for that.

Rupert, I know you’re all upset about all those SOPA & PIPA protests last week. Why, without them, how will you keep all your shows from being accessible to people who just want to pirate them for free through things like Google TV.

Here’s the thing. Go look in a mirror. See that guy looking back at you? Put a big dose of the blame on him. Because he makes people like me, who are already paying you three times to watch The Simpsons, to end up thinking maybe you just really want us to watch pirated content instead.

Pay You Three Times, Shame On Me

That’s right. I pay you three times for The Simpsons. First, I get it broadcast over the air. That’s me paying you for it, because the airwaves are mine — not yours. You’re simply allowed to lease them from the public. You’re getting a piece of that spectrum from me. In return, I expect you to deliver me valuable content through it. Well done with The Simpsons.

But you know, it’s easy to miss things broadcast live over the air. Also, my signal is pretty bad. So I pay a second time, to DirecTV, to get exactly the same content you send over the air to me through satellite TV. I get a better picture. I get the ability to DVR episodes to watch later. And I pay something like $125 per month for my subscription, some of which goes into your pocket.

That brings me to my third way of paying: Hulu Plus. I don’t DVR everything. Somehow, I missed The Simpsons when it started up again this fall. But Hulu Plus has turned into a lifesaver in these cases. It has let me catch-up on programs. It’s been well worth the $7 per month I pay for it, some of which, again, goes directly into your pocket.

The Simpsons: Web Only?

And now to tonight. My son fired up Hulu Plus, so we could watch The Simpsons, as we have in the past. But no luck — he got a “web only” message. Turns out, I discovered after doing a little searching with your least favorite search engine, last year you started limited next-day episodes.

Whatever you did, it’s clearly gotten worse. Apparently, I can’t watch it on Hulu at all through my TV: 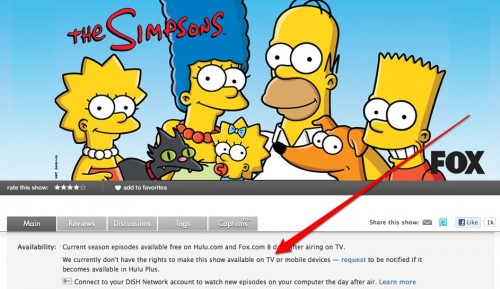 Despite paying for Hulu Plus, I cannot watch The Simpson on any device like my Roku player that is designed to play The Simpsons direct to my TV.

I gather this is because you don’t want me to buy Hulu Plus and stop paying for DirecTV, right? I get that. But it’s not like I have the same option to watch archived episodes on DirecTV, If they’re offered on demand, they are impossible to find.

I can’t even authorize my Hulu account to know that I’m paying DirecTV already, as I apparently could if I had a Dish account. Why not? Who knows. You or DirecTV or Hulu are all probably fighting with each other over rights issues.

But hey, it’s not like I can get HBO GO on my Hulu, either. Despite paying for HBO through DirecTV, they don’t let me enable my Roku with it, either.

Lesson? Search For TV On The Web

Now what have you taught my 13 year old, who wants to watch last week’s episode? That he should fire up his computer, because if he does that — and sits through the 2 minute load time for The Simpsons web site, you’ll give him the episode for free.

Why would you do this? Think. What’s a teenager like him likely to do, if they’re looking for The Simpsons, if you don’t offer it through easy, safe, direct-to-TV options like my Roku? He’ll search for it through things like Google and perhaps find it, in this case. But if you don’t offer it, since you’ve driven him and other kids to think they should search, maybe they’ll keep searching until they find some place that does offer it.

Now, if I really wanted to watch last week’s episode, on my TV and without firing up my laptop and digging out the HDMI cable, I could buy it from Amazon or Apple iTunes. But don’t you think paying four times for the same content is a bit much?

Let me end with Google TV. Remember at CES? How upset you were to learn (you’re just learning this?), that if someone searches for video content on Google TV, they might reach pirated content?

Hey, I’ve used Google TV from the beginning, from before you and the other networks blocked it. Before you did this, the Google TV search results sent me directly to your web site, where I could watch your content directly from you, exactly as I could if I wanted to hook-up my computer to my TV. That’s because, after all, Google TV is really just a really small computer.

Thanks to your blocking, they don’t even bother to list your site, because why do it? It’s not like it works for those who use it. Instead, it pretty much searches the web — which lists things you might not like.

It’s not right, Rupert. Finding the TV content I want shouldn’t be this complicated, especially for someone who is actually paying you. Fix it.