Creative Commons is supposed to be this great way for people to license out their works to others. But it’s annoyed me for ages how lame it is in practice, when it comes to Flickr.

Let’s say I want a picture of a car to use on my commercial blog. Using the Flickr Advanced Search page, I enter “car” and select the “Only search within Creative Commons-licensed content” and tick the “Find content to use commercially” option:

In the results, I find this really cool picture of an old Desoto: 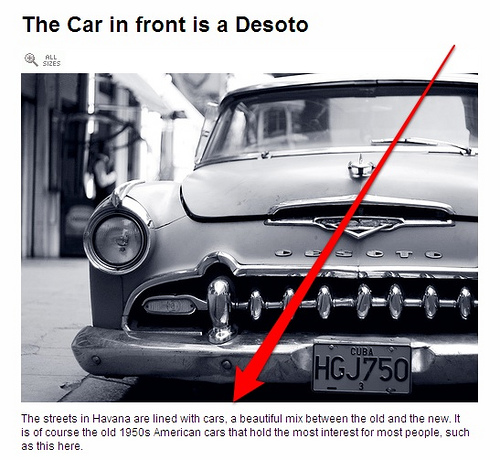 Notice the big red arrow pointing to the description. There’s nothing here that tells me how this work is licensed or how to attribute it.

Well, elsewhere on the photo’s page at Flickr is this:

Now, I can’t even read those icons, much less know what they’re supposed to mean at a glance. But that’s OK, because it’s fairly obvious that the “Some rights reserved” text is a link that might tell me more. So I click on it, getting this page: 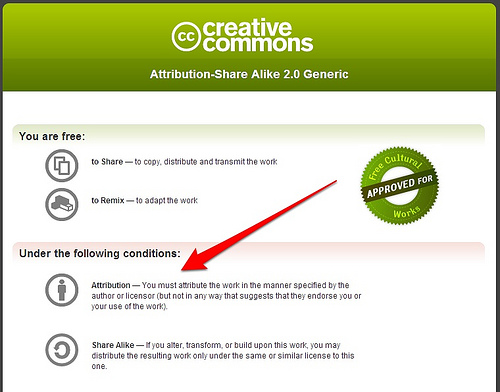 Well, kumbaya! Look at that feel-good stamp. “Approved For Free Cultural Works.” I feel so collectively good. This kind soul is saying anyone can use their photo using this license, as long as:

You attribute the work in the manner specified by the author or licensor (but not in any way that suggests that they endorse you or your use of the work).

Um, so where’s the attribution manner “specified” on that photo? Remember me pointing at the picture description? There was no “manner” of attribution indicated there. Am I supposed to:

I’ve seen the first four methods used, and I’m sure there are other variations people have come up with, since many CC licensed pictures under Share Alike fail to specify how they should be attributed (for instance, the first 10 “Share Alike” pictures I found in a car search at Flickr had no attribution info on their photo pages).

Even when you do get attribution, things aren’t always clear. For example, TechCrunch took heat today for using some images without attribution.

Mark Lobo wasn’t happy when TechCrunch used one of his images from here in this story without the specified attribution (Mark Lobo Photography): 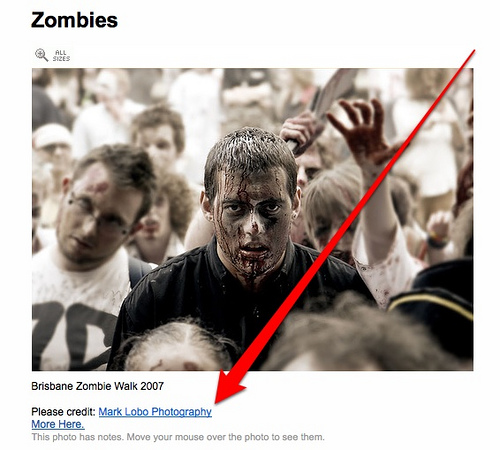 See how I’ve pointed to his attribution guidelines? Pretty straight-forward, right? Well, did Mark just want that exact text used, or did he also want to have a link to his site with that exact text? Are the rules different if used in an offline manner, where no link could be provided?

After some tweets, a credit was added, which seems to have made Mark happy, even though the attribution doesn’t match what he specified:

The TechCrunch link says only “Mark Lobo,” not “Mark Logo Photography,” and it points to the photo page on Flickr, rather than Mark’s photography site of http://www.marklobo.com.au/, which he specifiies.

TechCrunch is also a commerical site, and the picture was originally licensed for non-commercial work. But it’s pretty clear from Mark’s tweet that he’s good with the usage now. Still, you can see how things can be confusing.

Here’s another example where even with detailed information, things can still be confusing. Michael Gray called TechCrunch out on another photo used without attribution in this story.

In the picture’s description, it says simply “comcast van.” Underneath it, the first comment is from the photographer, who’s quite detailed and flexible in his attribution request:

I’ve presented it here under a Creative Commons license. You can use it but you need to present a photo credit and shouldn’t go photoshopping it into something else or use it to sell something.

The attribution can simply be a text photo credit that is a hyperlink back here – that’s what Gawker Media sites do for the pictures they use from their flickr pools.

TechCrunch (I guess eventually) went with naming him and a link back to the photo. But the “attribution can be” part of his guidelines implies that attribution could be something else.

Flickr’s a major place where people seek Creative Common images. It shouldn’t be guesswork to figure out where attribution guidelines are (in the description? in the comments?). Both photographers and publishers wanting to use their works need Flickr to help expand what are proper, standard guidelines for attribution.

That’s all fixed now. Flickr’s got a US Government Works license that now shows up. Meanwhile, over at the White House, they’re using Creative Commons to cover material that the public shares with them. The White House copyright page tells you: 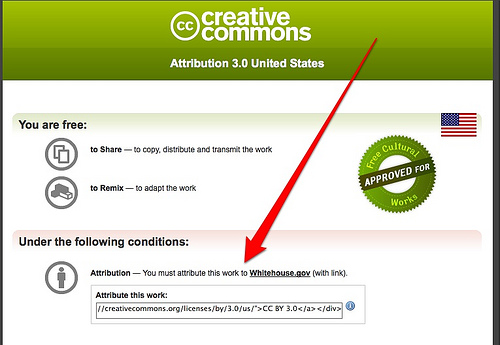 Cool! The White House has some specific info on their license that I wish Flickr photos could have. How’d they do that?

Well, hit the Creative Commons site, and you’ll see that if you make a license there, it allows you to embed specific attribution information into your license: 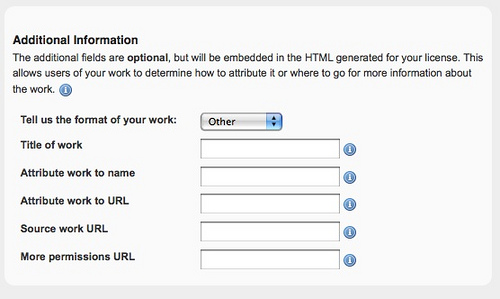 Flickr should tap into this. It should prompt you to add that type of information into a unique license for each photo, perhaps pre-populating the license with information you can fill out once (say your name, your web site and so on).

Still, you can see there are further issues. It’s great that the White House says shared images can be reused with attribution by linking to the White House. But what if you’re using the image offline? Is text enough? I’m guessing so, but it probably should say.