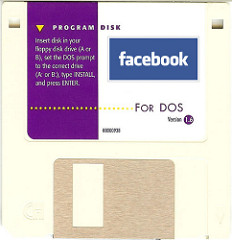 So as I go through the applications, a light bulb (compact fluorescent) finally kicks in about Facebook. It’s AOL.

Shit — it’s AOL. How on earth did all these people wind up back in AOL only a year after AOL gave up on the walled garden?

Maybe they’re too young. Maybe they don’t remember. I remember some Diggers once heckling me to go back to AOL. Made me laugh because they’d probably never been on it.

AOL was wonderful, of course, because there were so many things you could do. Plus, it WAS what you wanted your mom to use instead of the web during the first year or two that the two ran side-by-side as rivals. The web was messy, hard to access — geez, you sometimes had to worry about what Winsock was running. AOL was a clean bright place (unless you went poking around).

So here I am spending more time on Facebook, and I can see the attractiveness. Yes, it will centralize my friends (some of whom aren’t, but it’s easier to accept everyone, it seems). And it’s clean, bright, the apps are fun — there’s lots to play with. It IS cool.

But it’s scary and some parts just feel WRONG. As if people don’t have enough to do, now we have to go back to the AOL mentality of programming for a walled garden? And we have to go back to maintaining not just web sites but Facebook profiles? The circle really is going to spin round that way again?

If Google did this, said you could search but only if you registered — said that you could access users but only programming on their platform — the words evil would come out fast and strong. Ah, but Google does exactly that, right? Got the API, has the gadgets push. Sure — except unlike Facebook, Google doesn’t have that walled garden. You search — you go out. You want a map? The map is there for anyone to use. You want to make and share a map — no one needs to get all their friends to download an app.

Of course there are plenty of examples where Google IS closed and would love to be more so. But this feels different. And I know others far more experienced with Facebook that I, a babe in the woods, have discussed the walled garden and the issue of apps and so on. But still — I wanted to jot down that gut reaction — shit, it’s AOL. And if the circle is turning, it’ll keep turn eventually just as it did on AOL.