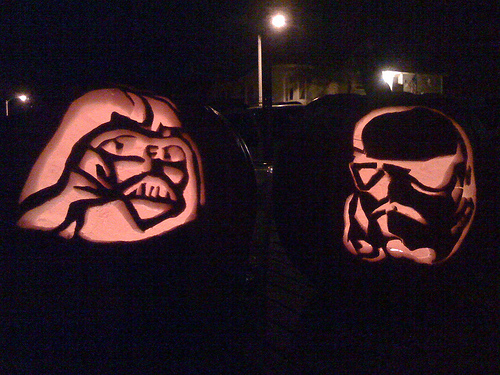 Your Halloween pumpkins don’t have the same old boring designs. Get some pumpkin stencils and carving! You can make some amazing stuff, including Star Wars pumpkins or for Twilight fans, Edward and Bella. How about Jay Leno? The Kool Aide guy? A Cylon pumpkin? Some tips and links, below.

Like many, I’ve been carving pumpkins for ages for Halloween. But about 10 years ago, I was transformed into a master pumpkin carver by virtue of living in Britain. There, Halloween wasn’t widely celebrated at the time, and carving pumpkins wasn’t commonly done. When some friends saw my basic Jack-O-Lantern, you know — eyes, nose and a basic toothy grin — they wanted me to teach them my “masterful” skills.

That started an annual pumpkin carving fest. I started bringing back Halloween pumpkin carving tools on trips back to the US. These often where bundled with stencils. I dived into making more complex pumpkins.

This year, I specifically went looking for some fun patterns and was amazed at what’s out there, for free. Some links are below. But first, some very fast pumpkin carving tips:

A little note to those who make pumpkin patterns. Promise me you’re actually trying to carve using them. Often they include tiny holes or cuts next to another one that are extremely difficult to actually do.

How about those patterns?

Star Wars Pumpkins: Put a Sith or Darth Vader on your porch with these free Star Wars pumpkin patterns from StarWars.com. The ones I did last night were above. The Stormtrooper, ugh — the entire thing fell apart, patched back up with paper clips. But it was fun to try.

Twilight Pumpkins: If you’re a big Twilight fan, I stumbled across these free Twilight pumpkin stencils from Gather.

Cylon Pumpkins: Sadly, I didn’t find any good Battlestar Galactica stencils. That’s probably because I got distracted by these stories about how to make Cylon pumpkins with red LEDs.

More Pumpkin Patterns: eHow has a nice collection of free simple templates, as does Celebrating Halloween. Check out the vomiting pumpkin that anyone can do. Squidoo has a nice page with links to some templates, examples of tools and tips. Pumpkin Glow has an amazing collection of un-Halloween patterns. Jay Leno pumpkin? The Kool Aid guy? They’ve got them, and for free. If you want to pay, Zombie Pumpkins has what looks to be a nice collection. You can get over 200 for $20.

Postscript: Now you want to see a real master? Look at Noel Dickover’s work here. Yes, that’s a friggin’ Death Star pumpkin! And look at the detail for the Where The Wild Things Are one.

Postscript 2: I’d mentioned earlier about getting pumpkin carving kits. You can find these in many stores, and here are a few options you can get through Amazon (if you do buy via these links, I earn a little bit):

Pumpkin Masters Pumpkin Carving Kit with 12 Patterns & Tools: I bought this exact kit years ago, and all the tools still work — plus you get a nice collection of templates that help you get beyond the basic Jack O’ Lantern.

Pumpkin Masters Carving Party Kit: This is another nice set of stencils that I’ve used, along with a larger collection of tools.

Star Wars Pumpkin Carving Kit: Looking around, I found Star Wars stencils that you can buy, complete with three basic starter tools. The tools don’t look that great to me, though.

Boston Red Sox Pumpkin Carving Kit: No, I’m not a Red Sox fan. Orange County Los Angeles Angels Of Anaheim, actually. But this is just one example of many sports-related templates that are out there. Who knew! SF Giants fans — here are some free ones for you. Texas Rangers, get your free ones here.

Extreme Pumpkins: Diabolical Do-It-Yourself Designs to Amuse Your Friends and Scare Your Neighbors: I found this book, and it intrigued me enough to order it. Looking forward to seeing if it gets me to the next level. There’s also a sequel: Extreme Pumpkins II: Take Back Halloween and Freak Out a Few More Neighbors.

Dremel 7000-PK Battery-Powered Pumpkin Carver: I had no idea such things existed! This is another item that I’m ordering for myself, to see if it saves me time and allows me to do things I can’t with my basic set of tools.