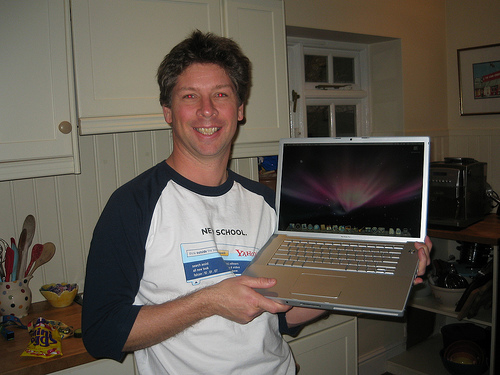 Who knew that I would buy a Mac before finishing my yet-to-come “25 Reasons I Hate Apple” list. Yes, if hell is freezing over — if dogs and cats are playing together — if blackhat and whitehat SEOs are holding hands, perhaps I shifted the universe with my purchase.

Here’s the deal. All the Search Engine Land editors had a meeting at SMX West. I sat down and flipped open my trusty Toshiba Windows XP machine, which I’ve had to go back to while my super-wonderful Sony Vista laptop goes back for repairs. I was the only one without a Mac. Sigh. I knew I’d been beaten.

Plus, the new Macbooks had come out. So I now own a MacBook Pro, 15″ screen, 2.4 GHz. I bought VMWare so that I can get Windows XP running on it, as my security blanket. And I was mean and rude to the Mac employee who sold it to me, complaining I should be able to just buy Mac software for my Intel computers and what, Steve Jobs doesn’t have enough money that he has to resist that.

I suspect I’m one of the most disgruntled Mac owners out there now, since I bought the machine almost against my will. Maybe I’ll grow to love it. So far after the 10 minutes I’ve spent with it, I’m still friggin annoyed there’s no way to maximize a window to take up the entire screen. WTF — why does this not bother Mac people? And that annoying toolbar/finder/whatever thing at the bottom of the screen, I want that to go away. And figuring out how to get a new tab in supposedly wonderful Safari, ugh.