I can sync with Windows Media Center to download cartoons for the kids to watch on my phone. I can browse the web (slowly), read all my email, view my calendar, play games and lots of other cool things. But man, what do I have to do to get a phone like 24’s Jack Bauer.

24 has started up again for its latest season here in the UK, showing on Sky 1 on Sundays at 9pm (and repeated endlessly throughout the week). I missed the first two episodes while on vacation (Palmer assassinated? Michelle dead! Chloe having sex!!!), so I dived in with episodes three and four this weekend.

Now I’m used to suspending my disbelief with Jack’s phone, from watching the show over the years. There seems to be no end to what CTU is able to send to him magically or make the thing do. Plus, the battery never seems to die. In fact, says this site:

Naturally, Jack’s had some upgraded phones over the years. I tried doing a little research to make a chart of models, but I couldn’t pin down a good list. But in season four, he apparently had Siemens SX66.

This season, he’s kicking back with the Treo 700W Windows Mobile phone I’ve got my eye on. I’m just waiting for a GSM version, so I can use the phone here in the UK, then swap out the SIM card and use it with Cingular or T-Mobile in the US.

Jack’s latest phone is pretty hot. Blogs4Bauer even made a nice diagram of all it can do: 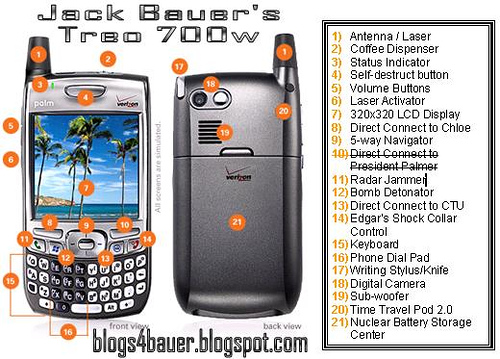 But I can’t suspend disbelief over this phone any longer, not after episode three.

In it, Jack wants to take out a terrorist who is wearing a bomb belt. Chloe does her computer magic to tap into the international bomb belt database, to get the triggering code that if broadcast will set off the terrorist’s belt. She fires that to Jack’s phone, then tells him to reboot the phone. When it restarts, he’ll be able to push a button and blow the terrorist away.

Jack does the reboot, then complains to Chloe that it doesn’t seem to be working while he is looking at the phone with a reboot screen.

To be clear, he’s somehow magically talking to Chloe on the same phone he’s rebooting!

That’s the miracle phone I want, the phone where I can restart it but be able to keep talking through the entire process. Bring it on! I’ve had to restart the damn Samsung so many times that it’s not even funny. If this is a new feature for Windows Mobile on the Treo, that would be handy. Bring it on!