Five years ago, I found myself heading down an unexpected path, starting a new business to carry on the work I had been doing writing and speaking about search engines and search marketing. On this anniversary, a few thoughts on life along the way.

For those unfamiliar, I’ve been covering search engines for 15 years now, since I first wrote a publication back in April 1996 called “A Webmaster’s Guide To Search Engines.” I later developed that into the Search Engine Watch web site, which I sold in 1997 to Internet.com — the company today known as WebMediaBrands.

While I sold the site, I continued to be the editor. I also was instrumental in helping to develop, in 1999, the conference series that was then called Search Engine Strategies (it was rebranded last year as simply SES). If you want more background on both of these, and my roles with them, see the links below:

Things unexpectedly changed for me in 2005. The web site I founded, and the conference series I helped create, were sold along with the ClickZ web site to a company called Incisive Media. I wasn’t unhappy with the sale. I found it worthwhile to agree to stay on when the deal was made.

A year later, when my contract was up for renewal, I no longer felt it made sense to stick around. That made for an interesting day: 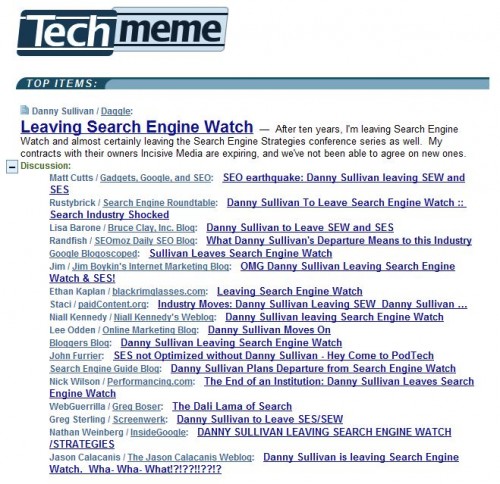 If you want the backstory about that, see my previous posts below:

I announced my departure on August 29, 2006 — hence my five year anniversary today. Well, a few days off — I was on vacation when the actual date happened. Being on vacation, totally unplugged for a week, is a pretty great sign that things have grown well.

In the end, I felt I could produce a better web site and a conference series, as well as have a long-term interest in these, if I went out on my own. So I did. Search Engine Land became my new home; SMX: Search Marketing Expo my new conference series. But by my home, I mean these were the new places where I was continuing to do the work I’d always done, not that these were creations solely on my own.

Instead, these — along with Sphinn, Search Marketing Now and our recently launched IMT Courses, are creations of a new company I cofounded with partners Chris Sherman, Sean Moriarty and Chris Elwell: Third Door Media. Our little company now counts over 15 employees and recently made the Fortune 5000 list, ranking at 1,585 overall and 147 the Advertising & Marketing category.

Later this month, we’ll hold what’s firmly on track to be our biggest search marketing conference ever, SMX East, with record attendance. Our first ever show, SMX Advanced, has sold out ever year we’ve held it, five years in total, now. Search Engine Land keeps having record traffic.

How did we get here? Well….

It sounds easy. Just have good people. Finding good people, however, is hard. I wish I had great insights to share on how to find them, but most of our staff has come about because someone knew someone else. Maybe that’s a good lesson. Your best recruiting tool might be your existing employees.

Having started originally 15 years ago by doing everything myself, there’s a part of me that always thinks I should be mapping out exactly how everything should be done. But I’ve learned, fortunately, to largely let that go.

For one thing, there’s simply no time. If you try to do everything, you’ll either get nothing done or a lot of things done badly. Trust in your collegues, and you can focus on the things where you’re really needed — as they can too.

One of the biggest surprises in our growth story was the economic downturn of 2008. Suffice to say, we hadn’t planned on one of the worst economies since the Great Depression to happen.

Our plans for growth in 2009 quickly changed to adjusting to the new normal. We locked down thoughts of expansion and stayed extremely cautious on what we forecast. By battening down the hatches quickly, we came through the storm.

Someone asked me recently where Third Door Media was based, and I didn’t have a good answer. We’re incorporated out of Delaware. Many of our employees are based in Connecticut, for no particular reason other than that’s where they already lived. But we’re also spread out across the US, and virtually all of us work from home. We have one really small leased sales office.

The same person found that really odd. Really — no office? And we all manage to communicate and get stuff done?

Yes, we do. For me, having worked from home for 15 years, this feels completely normal. It’s easy to forget that most companies do not operate this way.

I’m not sure how many companies could do so, but I’m glad we can. Having no commute is a huge employee benefit. I sure don’t miss all that wasted time driving in a car or getting to-and-from work each day in some way.

How we do it varies. It turns out that old school Web 1.0 technology — email — works pretty well. So does pre-web phone calls.

Still, the ability to collaborate through shared documents via Google Docs is a huge help. Not having to run our own web servers but instead outsourcing that to the amazing Tiger Tech is also fantastic. Similarly, having our stats churned by Google Analytics and ChartBeat, or our ads served through DoubleClick For Publishers, saves us time to spend our technical development on things that can easily be outsourced.

I don’t have any tales to tell of navigating the world of venture capital. That’s because we’ve never taken any. We bootstapped ourselves and have grown based on the revenue we bring in.

(Note: I meant to put this in earlier, but if you do like stories of investment lessons, definitely check out Rand Fishkin’s recent, excellent piece Misadventures in VC Funding: The $24 Million Moz Almost Raised).

In some ways, I think that has made us a stronger company. I’m a big fan of SimCity. Sometimes I’d play using the code that let you start off with a huge wad of cash. I’d zone tons of stuff, add in streets everywhere and build out in a way I couldn’t do when limited to the cash I generated naturally. Usually, these types of cities didn’t do as well as those that grew organically.

Because we’ve grown to our revenues, I feel like we continue to have a solid base. Don’t get me wrong. I know there are reasons why a company might want to have outside investment. I recognize that investment might allow for new things that you simply can’t do on your own.

Still, I always feel a little sad when you read about some company on the tech blogs that’s sounds like it must be amazing because it has had a first, second or third round of investment. Companies that are doing great without taking or needing investment don’t seem to get the same attention.

I’d helped build my old site and conference series into a well oiled, humming machine. Then I walked away from all that, to build afresh. I knew it would be a lot of hard work, but there were things I totally didn’t anticipate.

For one, there were a billion little things that had to be put in place. I remember having to write our privacy policy at Search Engine Land, and spending huge amounts of time thinking about it, even though it really wasn’t a major part of my job. But it wasn’t necessarily anyone else’s job, either — and I wanted it to be right for our new site.

Another was discovering how, despite years of having a “personal brand,” that could be easily lost within the corporate brands I helped build. People often assumed I was with my old publication years after leaving it.

Yet another was discovering how hard it is for people to break habits. On one occasion about two years ago, I had someone complaining to me about SES. I explained that I no longer ran that show, in case they didn’t realize that. Yes, they knew, they said. I suggested that they might want to attend our SMX event. Maybe — they knew of them — but you know, they explained, they always went to SES at that particular time of year.

Perhaps someday, I’ll finish a piece I’ve long planned to write about making the right choice about search marketing conferences. The short story is there’s no “right” choice anyone can tell you. Each person ultimately will decide what’s the right fit for them and their needs. But suffice to say, if you’re not happy with ANY event, perhaps it’s time to broaden your horizons!

For us, the good news is that over time, more and more people have developed the SMX habit. That makes me pretty happy, because we put a huge amount of work into everything that goes into those shows, from the programming to the food.

The other good news is that you learn a lot going all the way back to the beginning. It causes you to reassess everything you do, to cast aside your assumptions or heavily test them. It’s an experience, despite all the work, I feel fortunate to have gone through.

In the end, I’m really happy and proud of the team at Third Door Media and the team at Search Engine Land for helping get the company to where it is today. I’m also grateful to all the writers and speakers who have worked with us, especially those who jumped in and gave support early on.