So it’s pretty clear that I love The OC, despite its geography flaws. But c’mon — The OC is simply Melrose Place further south in Southern California. And I loved Melrose Place. I loved it so much that it turned out to be the single most popular thing I ever did when I worked in newspapers.

Most of my work at the Los Angeles Times and later the Orange County Register was spent doing graphics reporting. If a plane crashed, an earthquake happened, some new virtual reality project was coming online, I’d did the reporting like an ordinary reporter would. Then I’d get with an artist to figure out how to illustrate the story. Once we had a concept down, they would do the great graphics, and I’d be doing the text along the way.

I have a fun portfolio of work. I talked with Buzz Aldrin to do a graphic on his ideas of getting back into space; helped illustrate the big Midwest floods of 1994 from a far; drove under broken freeway overpasses to help illustrate the Northridge Quake of 1994; explained how traffic signals worked; documented the big Laguna Beach fire; landslides in Anaheim and on and on.

My Melrose Place graphic beat all of those. I produced it when I worked at the Orange County Register, and Melrose was picking up steam. The entertainment section was doing a story and wanted a graphic. I was ready to go with my Melrose Matrix: 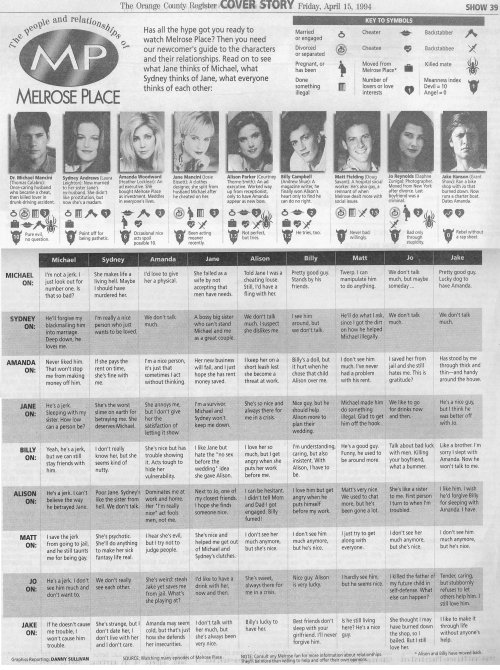 That’s the whole thing above, but I’ll do some breakouts below, as it’s hard to read. We ran this in the Orange County Register, and then it went out over the Knight-Ridder wire. To my art director’s surprise and amazement, it ended up in almost 50 newspapers nationwide. It was amazement I shared as well. We’d do all this hard work on “big” topics with heavy news value that some papers would pick up — but Melrose hits a home run? You’ve got to love popular culture.

I wanted to introduce each character, but there was so much to say and so little space. That why we needed symbols for key things like backstabbing or pregnancy:

Then I dived into a synopsis of each person on the show at the time: 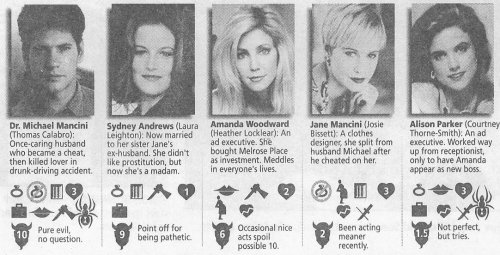 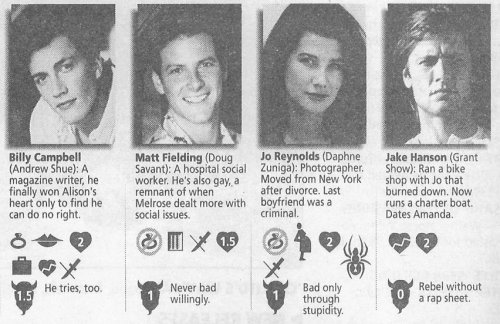 The heart of the graphic was the big matrix that let you see what each character thought of each other. The summary is below. Click on it to pop open a new window that’s easier to read. 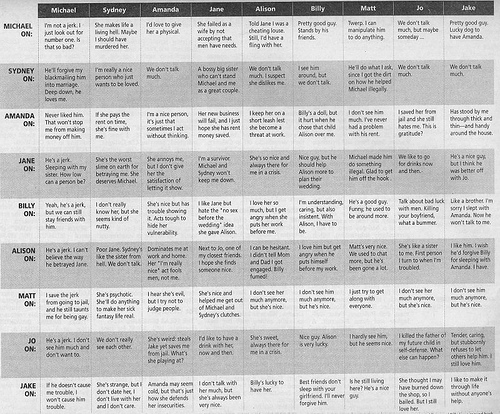 Every graphic needs a source line. Normally they’re pretty boring, but I got to have fun with this one:

FYI, among my treasured items is Marcia Cross’s autograph that a friend of my got when she Marcia came to her table in a restaurant back during her Melrose days. I love how she and Doug Savant (Matt) get to be reunited on Desperate Housewives.