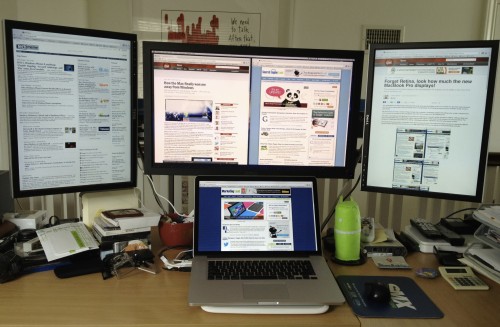 My old MacBook Pro had no problems running three external monitors. My new MacBook Pro Retina is easily able to do the same and should be able to do more, if I wanted. Here are the details of my setup.

I’m using three Dell monitors. My center one is a widescreen running 2560×1440, and the two side screens are running 1600×1200. I like the side screens being vertical, rather than horizontal, because it makes it easy for me to use them for reading web pages without scrolling as much. I use my middle screen for writing and main production. My internal laptop screen (which I’m running at 1680×1050), I use for email.

The middle monitor is powered out of one of my Thunderbolt ports (though I’m using the same DisplayPort connection to that I used before). The two side monitors use Diamond BVU195 USB adapters (that links to Amazon; it’s an affiliate link, so I earn a bit if you buy there). I’ve used this setup successfully for two years, and it continues to work fine now.

If you want to do the same, the posts I’ve written below have more details on using the USB adapters and making sure you can power through DisplayPort at the full resolution:

You’ll need the DisplayLink “alpha” driver that you’ll find here. After installation, gather your windows to your non-rotated screens (if you rotate), and that will help you confirm settings after doing a rotation (it’s hard to move a mouse when the image is on its side).

The MacBook Pro Retina has some interesting new options I haven’t tried yet. For one, there’s an HDMI port. That means I could easily power a fourth monitor that way, if I wanted. In addition, there are two Thunderbolt ports. I’ve never tried using Thunderbolt for powering monitors directly, but as Techmeme noted today, some are using those as another way of powering external monitors.

All these ports mean that my setup above could be done without the USB adapters. I should be able to use a Thunderbolt-to-DVI adapter to run my side monitors (they only have VGA and DVI input) and HDMI for my middle adapter.

In short, anyone should be able to easily have three monitors running. I believe with daisy chaining, the Thunderbolt ports each could run two monitors (that support that), so that would give you a total of four, the HDMI would be five, and your laptop monitor would be six. USB remains an option to run two or more. How about 10 monitors total, anyone?

Performance might be an issue with 10 monitors, of course. But three? Using my USB outputs, I have no performance problems for ordinary web browsing and regular work. I also prefer a three monitor solution, because my head mainly continues to face a single direction, straight ahead, with the alternating look to the left or right. With two monitors (which I’ve used before), you’re constantly looking to one side or the other.

Also related, my CNET column this week — Forget Retina, look how much the new MacBook Pro displays! — is a deep dive into how much more screen real estate the Retina display opens up, making 1920×1200 easily legible on a 15″ screen.