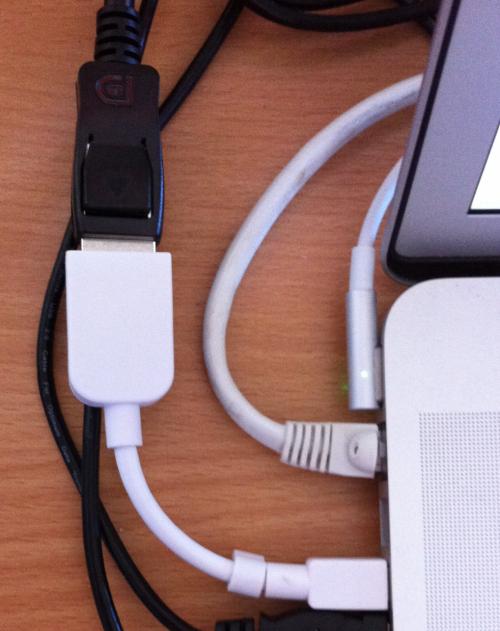 I recently upgraded my main external monitor to a new 27″ Dell display. All set to enjoy the high resolution glory of 2560×1140, I was perplexed. Why couldn’t I push the screen this high, using my MacBook Pro? The answer eventually turned out to be that the Mini DisplayPort to DVI adapter that Apple sells is limited to 1920×1200 resolution. The solution? A cheap Mini DisplayPort-to-DisplayPort adapter.

Apple sells its own 2560-by-1440 resolution monitor, the Apple LED Cinema Display. It works with a MacBook Pro no problem — I know, I tested my 2010 MacBook Pro with one when I was trying to figure out my issue with  a non-Apple monitor.

I debated going with the Apple monitor, but it doesn’t come with an anti-glare coating. The Dell that I eventually bought (links to everything below) does. Like many monitors, the Dell can handle several types of inputs: VGA, DVI, HDMI and DisplayPort.

When the Dell arrived, I connected to it using a DVI cable. I already had the Mini DisplayPort-to-DVI adapter that Apple sells, which I’d been using quite successfully to drive my old 24″ Dell with 1920×1200 resolution. The second picture to the right shows what it looks like.

With the new Dell, this configuration wouldn’t drive the monitor any higher than 1920×1200, despite the Dell being able to handle this. That higher resolution wasn’t recognized.

I tried various things. I checked to make sure I had the latest display card drivers. I did. I thought maybe I needed to manually choose a higher resolution in the way the display card allows, through Windows 7 (yes, I use the MacBook to run Windows 7 via Boot Camp). That didn’t help.

I tried other connections. I had a Mini DisplayPort-to-HDMI adapter and a spare HDMI cable. That didn’t help. I realized that maybe the problem was that my existing DVI cable was of the old “Single Link” variety and couldn’t carry the extra signal bandwidth for my WSXD display. Looking at the cables that came with the Dell, which I’d previously ignored, I realized a “Dual Link” DVI cable was included. But using that also didn’t help.

Eventually, I wondered if maybe a pure Display Port connection would do the job. Also, looking closely at Apple’s page about its Mini DisplayPort-to-DVI adapter, I saw a review noting that the adapter couldn’t do more than 1920 by 1200 resolution. That’s something you’d think Apple’s own specs about the adapter would note, but they don’t.

What I needed was a Mini DiplayPort-to DisplayPort adapter. Until now, I hadn’t really known much about DisplayPort at all. I thought it was only a quirky Apple thing. In fact, I assumed “Mini DisplayPort” meant DisplayPort. Nope, I learned — it’s yet the latest way to output video (and audio) from your computer, a sort of HDMI designed for computers. DisplayPort is a cable with plugs that look very similar to HDMI cables. Mini DisplayPort is a smaller version of this.

I called my local Apple store. No luck — they didn’t carry mini-to-regular DisplayPort adapters. I headed over to my local Fry’s Electronics. I was amazed they didn’t have them in stock, either.

The third picture to the right shows what it looks like; the picture at the top of this post shows it plugged into my MacBook. You can also see USB cables with that, but those aren’t related to the display cable. It doesn’t require them. Those lead to my various USB devices.

The new setup also sent sound, along with video, to my Dell monitor. That was a problem, as my Dell monitor doesn’t have  soundbar installed. This was easily solved. In Windows, right click on the speaker icon in your taskbar, select Playback Devices, then locate the speakers you want to use and set that your default.

For more information, see the links below. The ones to Amazon earn me a little bit, if you ultimately buy through them:

Remember, if you buy any Mini DiplayPort-to-Displayport adapter or cable, be sure it will power 2560-by-1440 resolution, if that’s what your monitor can handle. Not all do.

Also see these past posts about monitors from me. In addition to my new main external monitor, my MacBook Pro is happily driving two additional external monitors, as well as its own screen. The last post explains this more.