Still don’t know Minecraft? Well, if you use iTunes, the block-building virtual world game is giving you a wake-up call. The game is now the top grossing app on iTunes and settling between the top third and fourth paid app overall.

Minecraft Pocket Edition was released on November 17 and formally announced yesterday at MineCon, the first official event for the game happening in Las Vegas right now (see my write-up below).

Currently within iTunes, Minecraft shows as the top most grossing app and number four for paid apps overall: 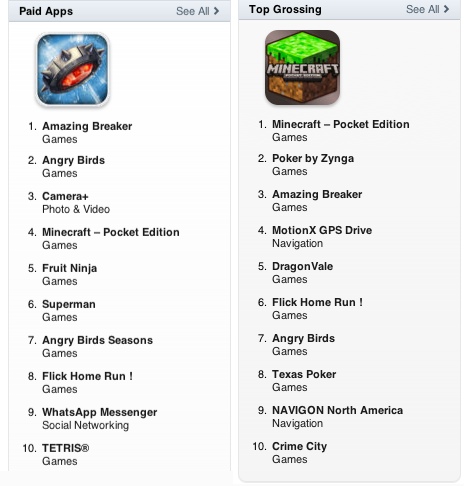 It actually made the top grossing chart yesterday, after only one day and before the official announcement, Mojang (the company that makes Minecraft) said yesterday.

But the iTunes Charts area on the web (rather than within iTunes), shows Minecraft is the third most popular paid app: