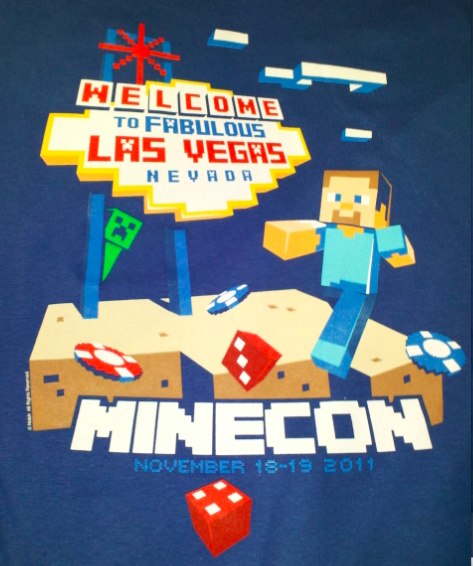 Angry Birds? That’s so 2010. The hot game you might not have heard of yet, but chances are your kids know, is Minecraft. And 5,000 Minecrafters have descended upon Las Vegas for MineCon, the first-ever event for Minecraft.

During today’s keynote, Markus Persson — Notch — the creator of Minecraft officially took Minecraft out of beta status. Minecraft also gained a version for iOS, and a new version was announced for Xbox 360, to be released in Spring 2012.

I’m one of the hundreds of slightly confused parents who have accompanied their kids to MineCon. “What’s that,” you can ask many adults here with kids, and the response will be, “I don’t know, you have to ask my kid.” Seriously, I could start a support group.

But Minecraft, a virtual world game that’s popular despite its retro blocky-graphics look, isn’t just for kids. There are plenty of adults who enjoy the game, as well, and a thriving industry of gamers who share what they’ve built and how to play on YouTube.

Seriously, YouTube is big with Minecrafters. There are Minecraft YouTube stars wandering around MineCon, and they’re getting mobbed.

Below, my live blogging of today’s keynote and the news that came out of it.

Warming Up The Audience

The audience has come into the room, with the stage set complete with an “Activate Minecraft” lever: 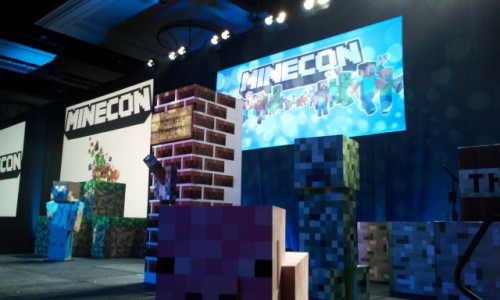 The auditorium has darkened, and a video begins, talking about how Minecraft has evolved. A deep voice narrates the changes. Lava! Multiplayer versions.

Then, the first major version of the game was released. “Not like released released but available?” says a second voice on the video. It’s been making snarky jokes all along along about everything the main narrator says.

Then the Nether was introduced (the crowd is now screaming about this). “The game hit beta” says the main voice. Weather. Snow. Lightning storms and rain. And now the main game is here.

A woman with pink hair that rivals Hayley Williams is up welcoming us: 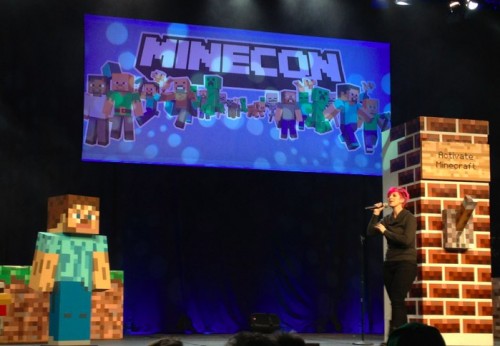 Now CaptainSparklez, a big YouTuber, is welcomed to the stage. His Revenge parody song of Usher’s DJ’s Got Us Fallin’ In Love is playing.

Lydia is back, talking about how that’s just one of hundreds of thousands of Minecraft-related videos on YouTube.

She’s talking more about community, a teacher using Minecraft in the classroom is here. “I’m sorry kids, but you can learn while playing Minecraft,” she jokes. In Sweden, one project is using the game to help build real life structures.

There are 16 million registered users now worldwide, and all the families coming together, a mom told her how she plays with her child and his grandmother. “A teenage guy with his mom at a convention, that’s really super cool,” she says.

Stuart Platt from Microsoft now talking about the Xbox 360 version of Minecraft. He says Microsoft is excited about the game, “it’s become a part of our culture,” he says.

Now the big news: “I’m very proud to say we have the first playable version of Minecraft for the 360 that you can play today here.”

He’s now showing a funny trailer Microsoft made about the news. Here’s the video:

By the way, here’s a look at the Xbox Live Minecraft booth at the show: 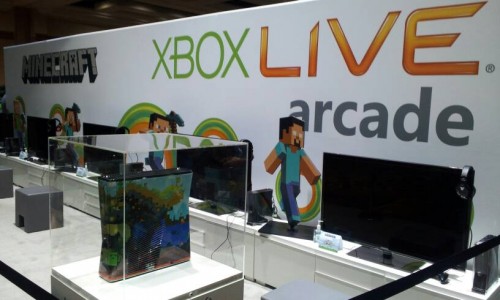 That Minecraft-skinned Xbox? Not a retail unit, and apparently no plans to make one. But you never know. Here’s how the controls operate on Xbox: 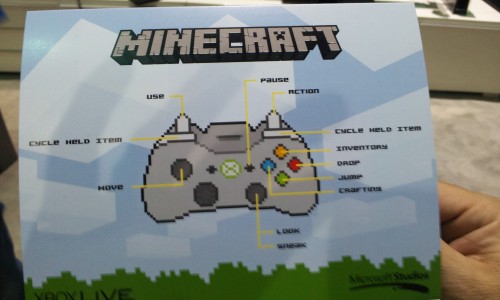 Now we’re getting a short update on the iOS version of Minecraft.

Minecraft Pocket Edition for iOS (iPhone, iPad, iTouch) devices has been released. (Here are some reviews). After being released yesterday, without a formal announcement, it already made the top grossing charts.

By the way, there is a version for Android — but it’s still only a demo, with limited features.

Now Lydia is doing a history of Mojang, explaining all the hires over time, calling each person up on stage, to much applause from each entrances by the audience. 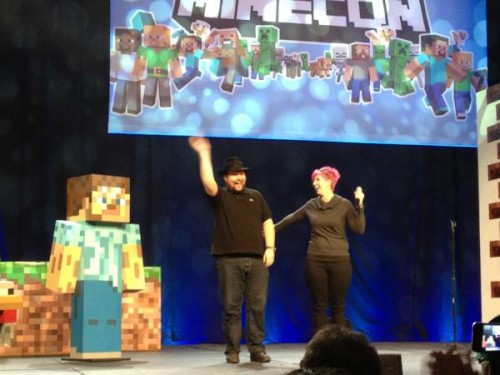 Now Notch is welcomed on stage. Many people are standing to applaud. One person yells that she loves him. “Thank you mom,” he jokes.

How did Minecraft get started? He says he was a game developer who started to do it just for himself. Then started talking about it on various forums, then it grew from there.

Now the team from Mega64 comes up to talk about the launch video they’ve made for Minecraft, starring Notch himself. It’s pretty funny. Here’s the video:

This is also apparently the official launch trailer made by Hat Films (it wasn’t shown during the keynote but is now posted on YouTube):

Now the team is called up, and Notch moves to the big switch to officially launch Minecraft, gives it a pull and confetti comes raining down: 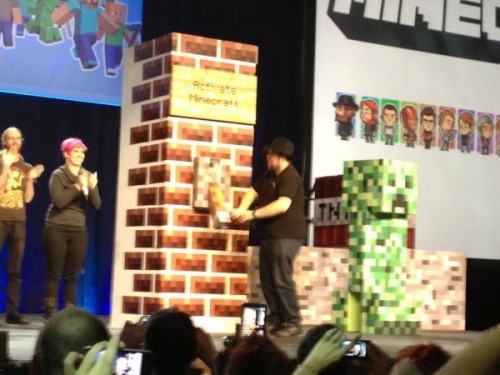 That’s it, keynote done. Here’s the whole thing, for those who weren’t there, as recorded by IGN: