Growing up as a Cold War kid in the 1970s, I was fascinated by Berlin. I’d read of the airlift, the city being divided then the construction of the Berlin Wall. I always wanted to visit the city. Little did I realize in the year that I did, the wall would actually come down.

In May 1989, after spending several months working in the UK on a work permit after college, I traveled around Europe for several months with my friend Tom. In Germany, we met up with my British girlfriend (now wife) Lorna and her sister who lived in Munich. From there, we went up to Berlin.

Here’s what we saw, looking into the no-go area, from one of the observation platforms that had been erected in then West Berlin, along the wall:

If it looks funny, that’s because I made it by taking several pictures and taping them together. That’s the way we shot panoramas back then, with film cameras and no smartphones.

This is how the Brandenburg Gate looked, stuck in the same off-limits zone where no one was allowed. This was shot from inside East Berlin — behind the gate, you can see the actual wall. 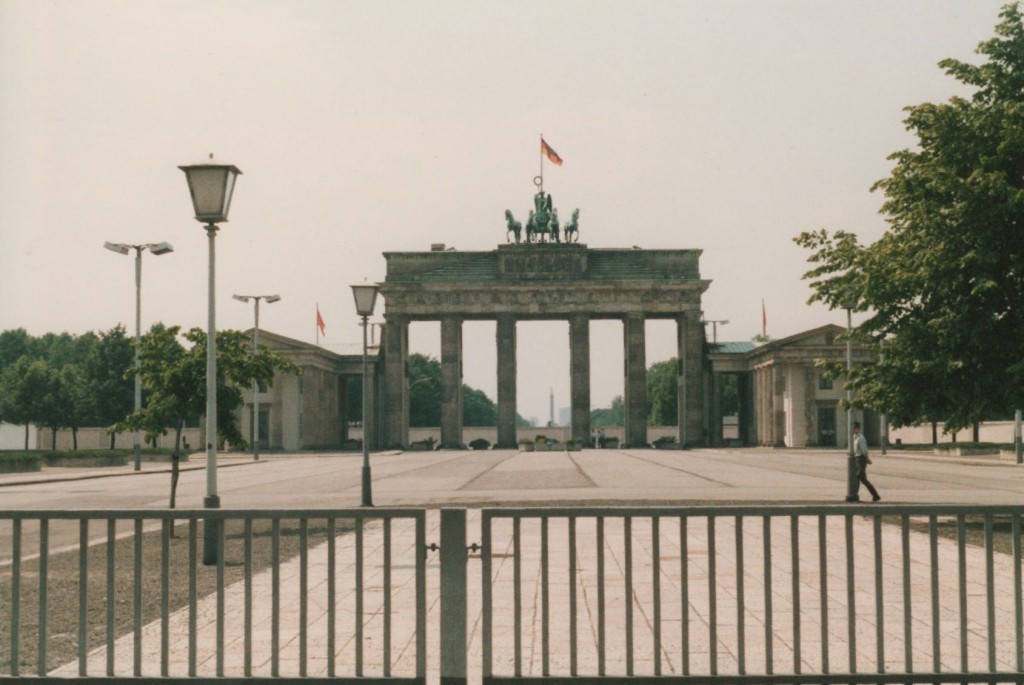 A few months later, I was back in California when the unbelievable news came — the Berlin Wall had fallen. East Germans were crossing over into West Berlin and going over the wall.

I’d just been there. I’d gone through Checkpoint Charlie to pass through. I’d seen the armed soldiers, the inability for people to pass freely — and nothing seemed liked that would change. Overnight, in a blink, it did.

In December, I went back to visit Lorna for Christmas. We decide that for New Year’s, there would be no better place to be than Berlin. We wanted to see the change there and how it contrasted to our visit only months before.

Here’s what we saw at the Brandenburg Gate when we arrived on December 31, 1989. This is from the West Berlin side: 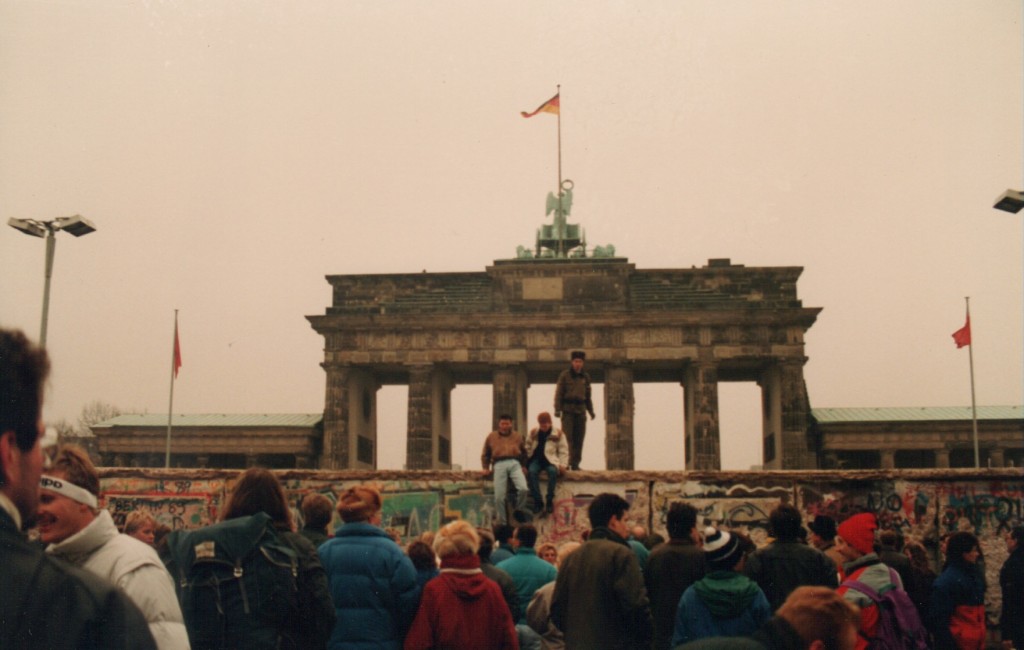 As you can see, the wall was still up. People still weren’t just jumping over it. In fact, that’s a guard on the top telling people to get down. If you wanted to pass, you still had to go through a checkpoint.

That sent us off to Checkpoint Charlie. Along the way, there were people everywhere chipping away at the wall, like this: 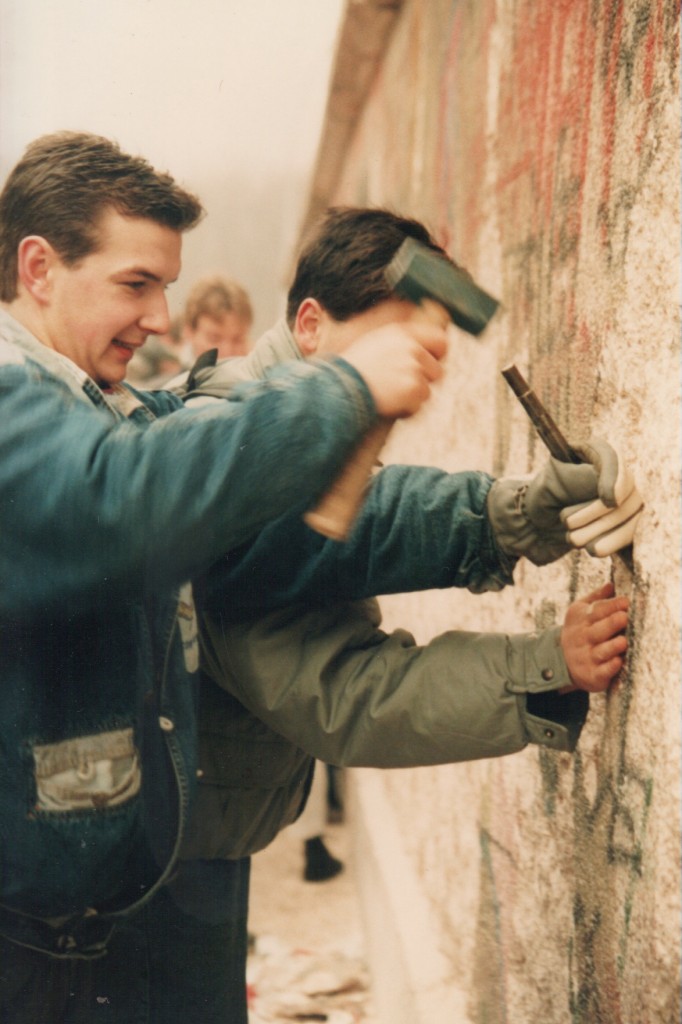 In some places, there were large gaps. Here I am literally between the wall: 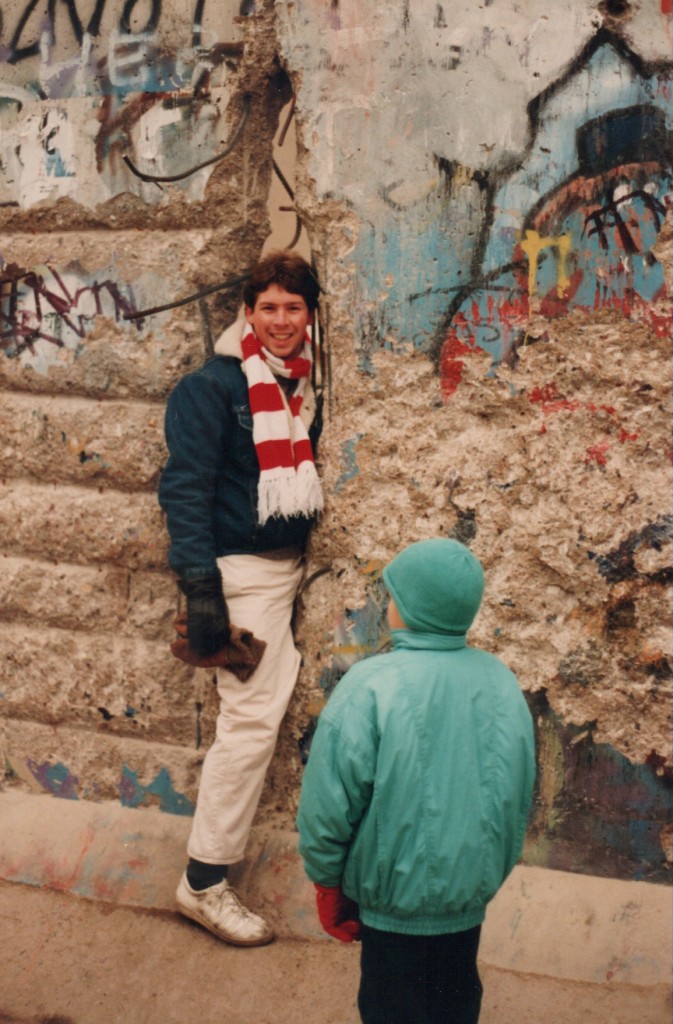 Eventually, we made our way through Checkpoint Charlie, where we were given our transit visas. Here’s what they looked like: 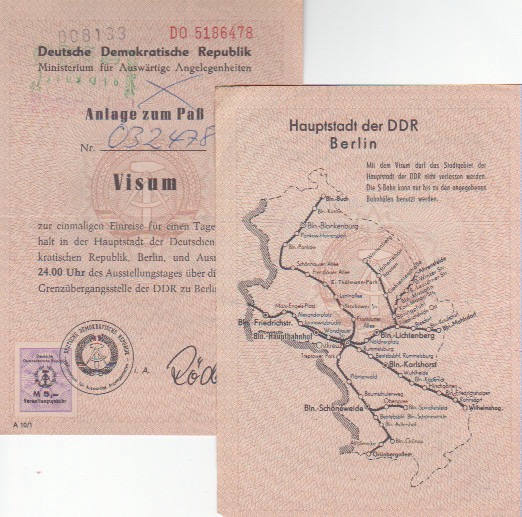 Technically, we were supposed to turn these back in when we returned through Checkpoint Charlie. But that never happened, because by the time we made our way back to the Brandenburg Gate, a party atmosphere had erupted: 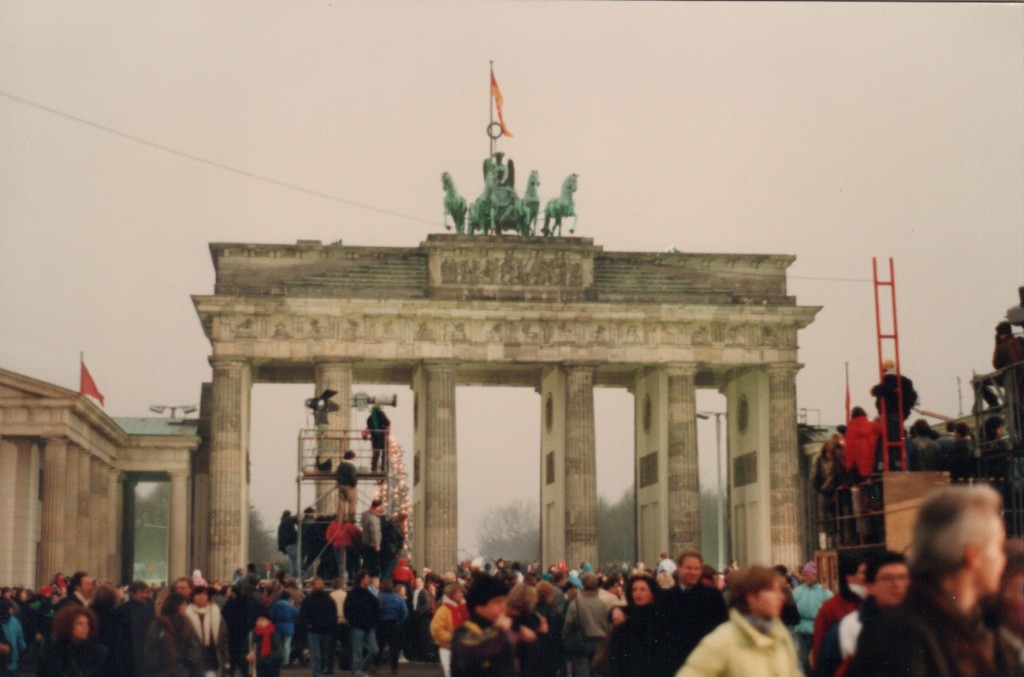 People were helping each other up to stand along the wall: 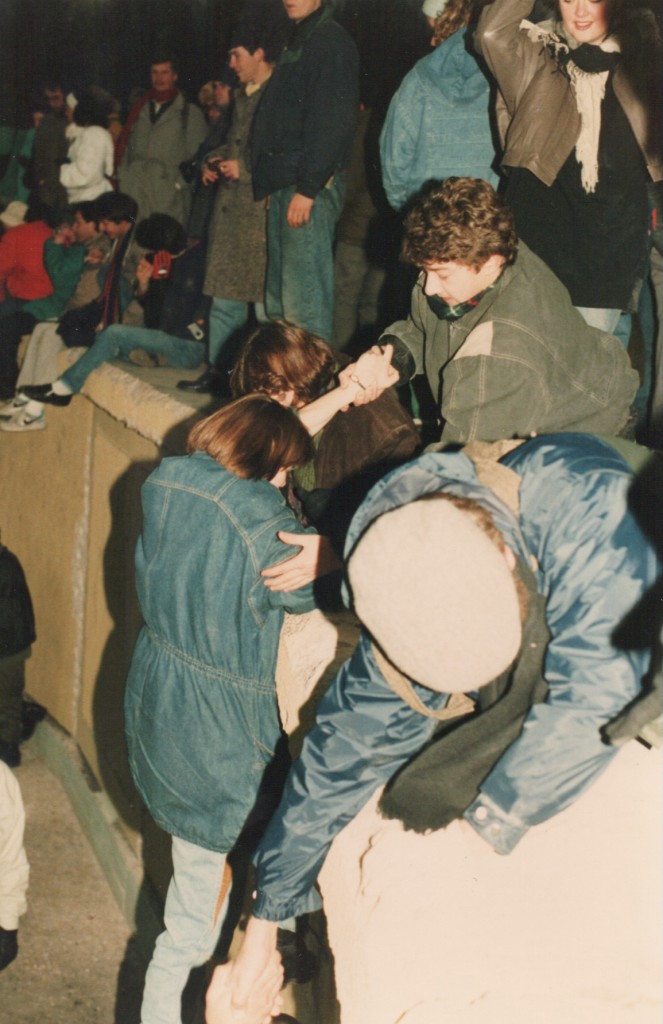 As you can see here: 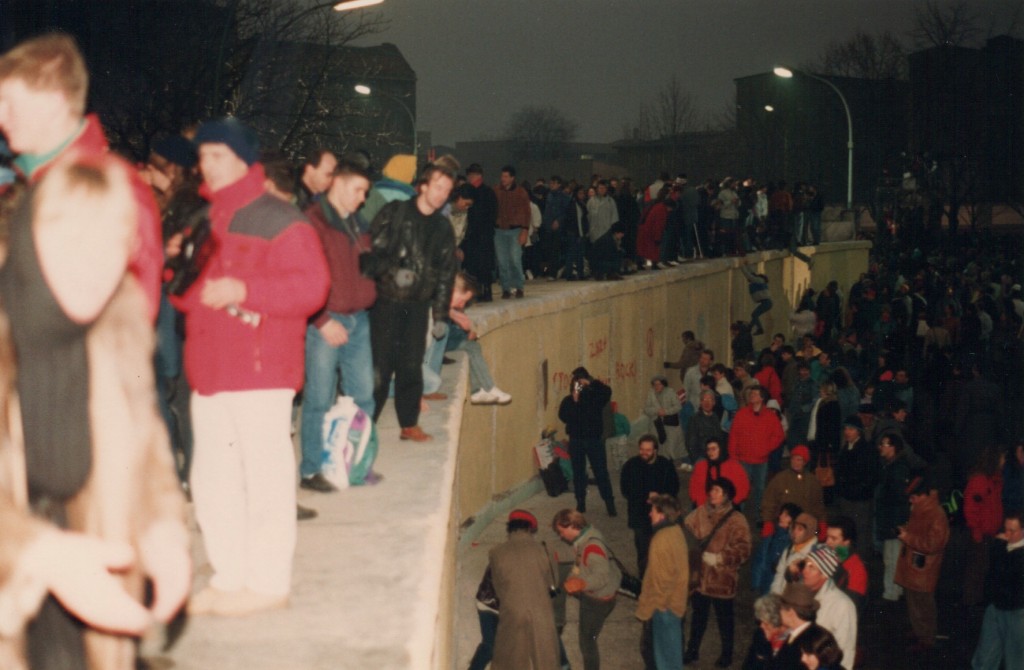 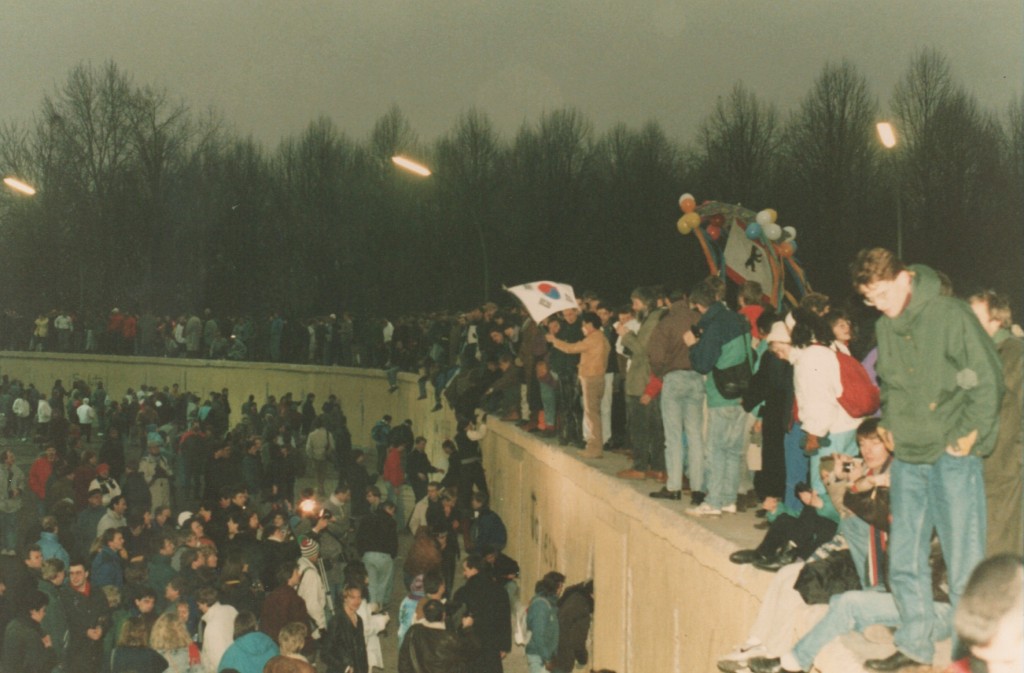 Those were shot from when I was atop the wall myself: 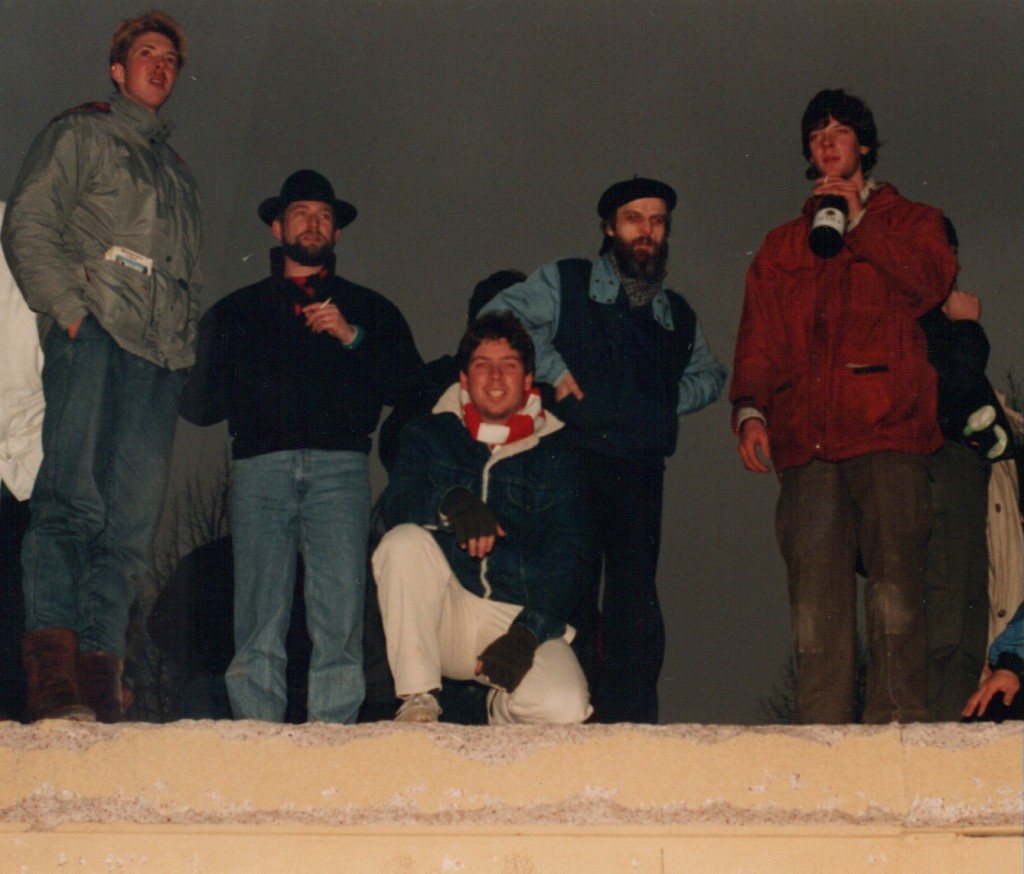 It was a great trip with only one downside — there were absolutely no rooms to be had in the city. Nothing. And the temperature was bitter cold. So, we trudged off cold, tired but content to the train station, where New Year’s Eve was actually celebrated as we pulled out of the station on a long night train ride back to Britain.

Here’s one last picture. Actually, two. On the top, a picture of the Berlin Wall from the west side, where the words “Break on through to the other side” had been written. That was taken in May 1989. On the bottom, the same section that we found on New Year’s Eve 1989. The words were all chipped away and, eventually, the wall itself was gone: 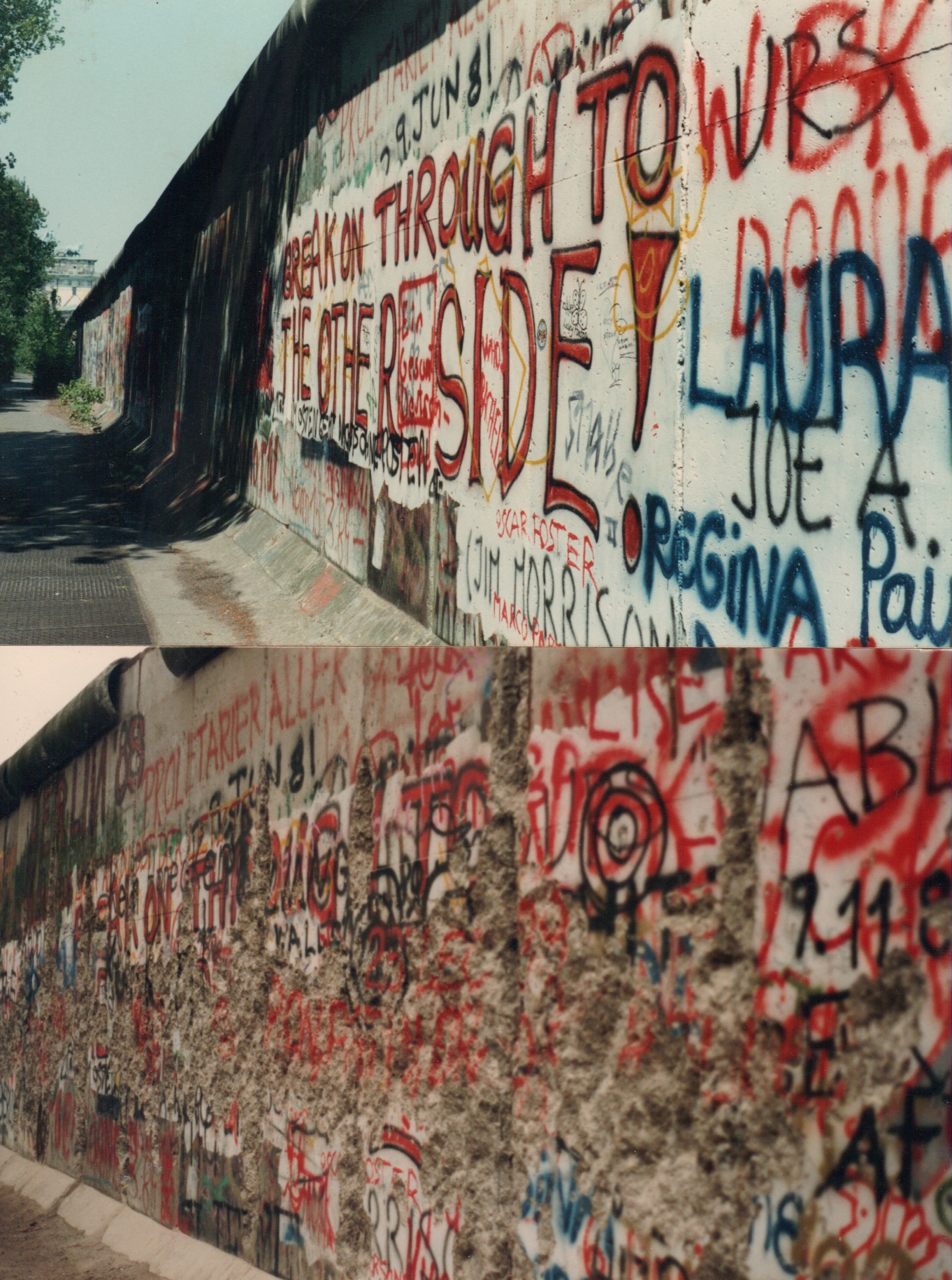