I’m on vacation this week, which meant staying at home but trying not to do much work. Instead, my big project is to construct a long-promised tree house with my boys, for my boys.

I’ve always wanted to build a tree house. Years and years ago at the Los Angeles Times, I even wrote an article about people who did them. The only problem is my general ineptness at building things. But a perfectly built treehouse is not required. What’s required is to have fun building the thing with my boys (rather than, you know, telling them to stand back and be bored watching me try to do it).

To get me started, I was given a great book for Father’s Day: Tree Houses You Can Actually Build. Well, I think it’s a great book. So far, it’s got me going and seems to have plenty of good advice. But the construction has only started!

After surveying the garden (that’s British for “yard” rather than being that little plot of ground within the backyard where you grow flowers or vegetables, the right tree was found. Here it is: 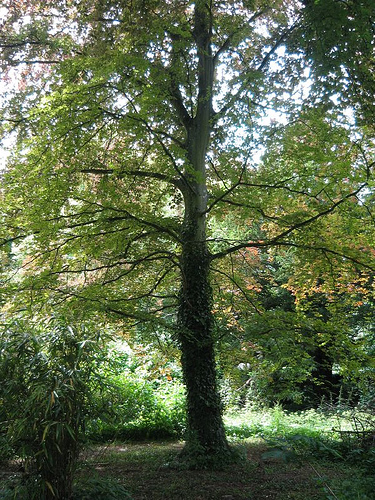 Maybe it’s a beech; I don’t know. My wife’s domain is the garden, so I’ll ask her and update later. All I know is that it’s a tree that looked good enough for the tree house. And the tree house? My book has plans for a “One Tree” tree house (as opposed to building across two trees, three and so on). This plan seemed simple, so I decided to go for it: 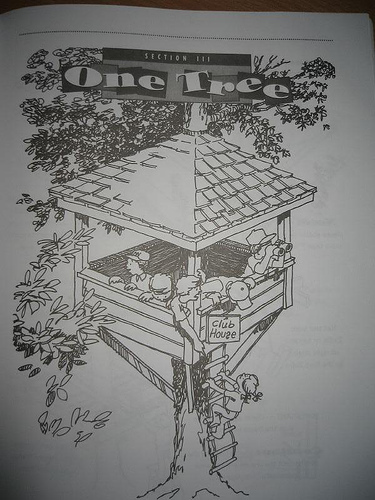 When I’m done, I’m sure happy children will frolic exactly as shown in this illustration. Heh. We’ll see.

Of course, I’ve already complicated things by altering the plan. It’s a big tree, with lots of room. Why not make this a two story tree house? Why not might be because I’ve never built anything like this, but shush! Who’s not up for a challenge? 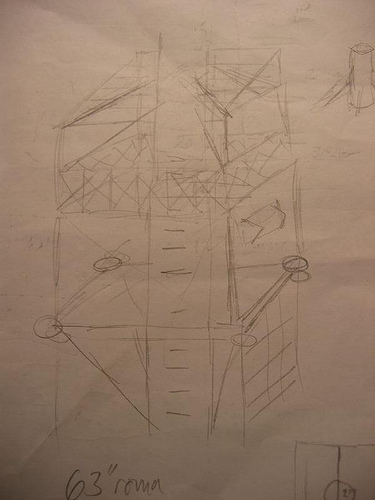 You’ll see at the bottom that there are four supporting poles that run to the tree, but then there are four poles going straight down. The original plans use the tree for support. But me, I’m paranoid. I figure posts going down will be safer. Plus, foolish me, I figured sinking poles into the ground would be easier than doing strange diagonal cuts. Silly, silly me.

Effectively, I’m building a club house around a tree. So why bother with the tree at all? Shush! Part of it is attached to the tree for support, plus it’s around the tree, so it feels treehouseish.

Next, it was time for wood. The cross beams for the original plans said to use 2×6 boards and not to make them longer than 7 feet. But that seemed not to give enough floor space for the tree house I wanted. Then a page in the book talked about using 2×8 beams for spans of 8 feet. So I figured I’d use those. That added some complications I’ll get to later. Have I mentioned never having done this before?

I worked out what I needed for the framing, the floor and so on. Then I called the local wood place, where I discovered that oddly, everything is done in metric. Oddly? Look, Britain like the US is one of the few places left that tends to use gallons, inches (this is why we learn multiplication to our 12s, right?) and goodness, stones for weight (I’m at 11 stone 13 pounds, by the way — 5 pounds to go!).

Fortunately, the guy on the phone was pretty good and knowing what a 2×4 translated into metric (that’s 47x100mm). We went through everything, then he gave me the price, and I tried not to fall out of my chair. Wood. Expensive. Who knew? Apparently (according to Michelle, who is recovering from Sphinn building), hurricanes and tsunamis have caused the price of wood to shoot up. So now I feel guilty for using it at all!

With the wood ordered, it was tree surgery time while we waited. Some of those lower branches had to go. Fortunately, I had help: 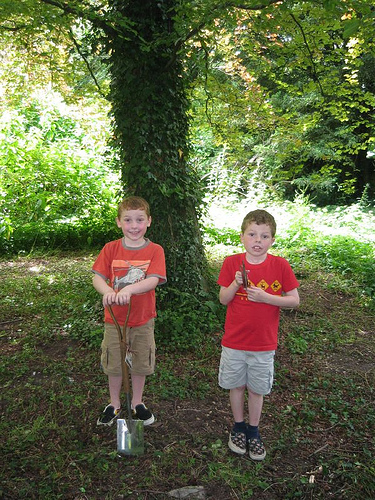 That done, happy times as the wood arrived. Here’s it gets lifted over our wall by crane: 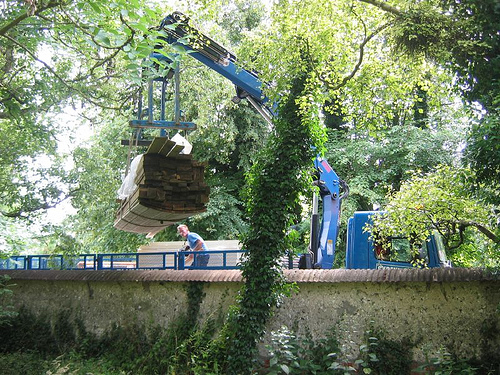 Um, maybe I ordered too much! I also realized that the plans call for two 2×6 beams to be nailed to the tree, with two more above that, like this: 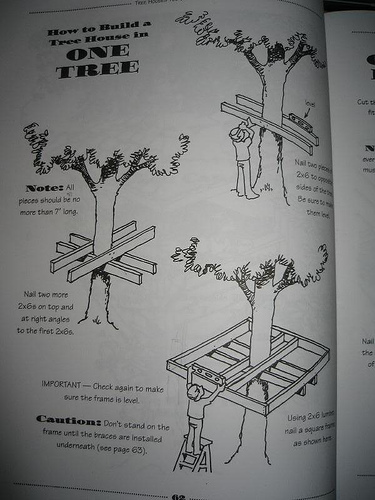 But I went for 2×8 beams, remember? So if I cross these puppies, I’m getting pretty high into the tree already!

My thought is that I probably will only use two cross-beams attached to the tree, rather than four. That’s because I’ve got these four massive poles to also support it. Right? Right? I mean they’re like 13 feet tall and when attached to the floor should make having four cross beams unnecessary.

Next up, to actually start construction. Do you realize it’s hard to know the mid-point of a tree that has a trunk that bends? And isn’t the same size all around? I put the beam up initially, then took it down to try and shift it over in a way that made me feel the tree house will be largely centered around the tree, when done.

The good news is that three nails were all it took to get it initially in place and fairly secure enough to think about getting the next beam up: 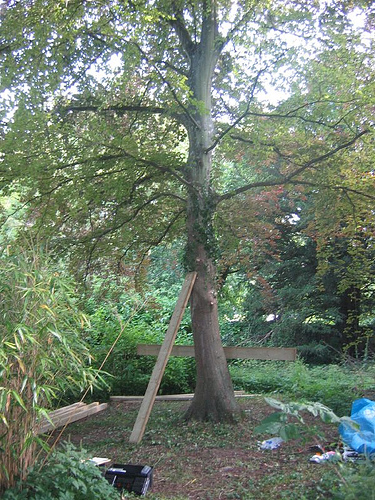 That’s when it was time for a trip to the tool store.

See, I didn’t have a level big enough to stretch across from the next beam to the first, to make sure they were level. And the book is very, very clear and insistent that the floor needs to be level. I’m fairly paranoid about it, now. So I went to the store, also thinking getting some galvanized nails that won’t rust will be good. I resisted the urge to get a laser level because (1) I’ve never used one and (2) frankly, an ordinary level seemed just fine. As for the nails, like what’s the issue with Focus (that’s like a Home Depot here, only less so) not carrying 5″ galvanized nails. Well, maybe they won’t rust before the wood rots. I also got some thick bolts to screw the board to the tree properly. No, even I am not lame enough to think those three nails (they were fairly short) would do it.

Back home, it was time to put that other board up, making sure it was exactly even lengthwise with the first one and also level with it. Making it level was easy. Just put the level across the two, shout a lot about “bring your side up” to my wife who was enlisted to help, and you’re level. And once hammered in, you find one board is sticking out like two inches longer than the other.

Yank off the tree, some marking with pencil, guessing at mid-points and eventually it was up. Later on, I found the book talked about things like using strings to mark diagonals and stuff to know if they’re lengthwise equal. Shush, it doesn’t have to be perfect. Plus, who has time for stringing diagonals when that board is heavy, you’re trying to hammer it with one hand and your boys are feeling pretty bored (“can we hammer yet?” — and yes, later they finally did get to hammer)

Both boards in place, I could finally measure out where the corners of the floor frame will be (that’s tomorrow’s job), so that I could dig holes for them.

Did I say dig? Oh, no digging. See, it’s a big tree, and old one too, and it has roots everywhere. That requires machinery. Such as a petrol-powered earth auger I rented from Brandon

Nice. I mean look, there’s a pole exactly like I want to sink deep in the hole this thing made.

Now the guy at the shop told my wife (who kindly picked it up) that it has trouble with roots. My vision of starting it and quickly drilling two or three foot holes soon disappeared. I’m down maybe a foot, and it’s WORK using one of these. Once, it spun me completely around (sorry, no video available).

What I really need is this bigger hydraulic one, but I doubt that will fit in the car. Instead, tomorrow, I’m going to try what I’ve got a bit more. I figure two feet deep should be enough.

Of course, I’m rethinking the entire four pole idea. For fun, I tried putting one in to the deepest hole I’d made. Lifting it in on my own made me feel I was in some Scottish caber tossing contest. I also found that it was hitting some of the branches I assumed would be well above the roof of my planned construction.

Hmm. These poles are heavy, and if they aren’t in deep enough, they’ll pop right out of those holes under their own weight. But then again, once they’re attached to the floor frame, they won’t be moving about. And the weight of the tree house itself should help keep the poles secure. Right? Right?

I’ll try for two feet deep and see how it goes. I can always cut the poles off at the first floor, then use separate pieces as part of the first floors frame. Right? Right?

Here’s where the day left off: 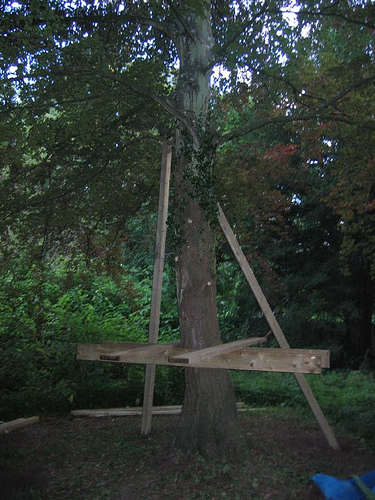