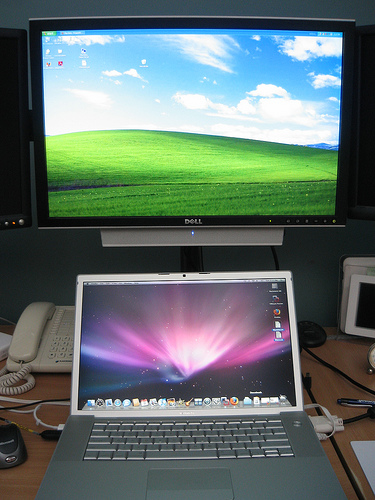 Loving the new Macbook Pro. Simply loving it. OK, there are a lot of things I really dislike (no task bar, stupid keyboard shortcuts). I’ll get back to those later. But someone told me that the Mac is one of the best ways to run Windows XP, and they were totally correct. I have both a super pretty laptop now and a fast one running all my regular apps without me having to deal with the Mac OS much or until I want to.

The guy at the Apple store told me that VMware was recommended by most people for running Windows on the Mac rather than Parallels. I trusted him and went with it. It’s great.

First challenge. How to get the software into the Mac. See, the Mac DVD player is cool. Nothing slides out. You just shove the disc in. But I wondered if it was working since the disc didn’t get “grabbed” until it was almost entirely in. But nice — it’s a pain having the disc carriers slide out. Ejecting was another issue. I could not figure it out. Totally lost. Eventually using the Finder window, it clicked that the VMware listing was the name of the disc (on the PC, I’d be looking for a drive name plus maybe the name of the disc). I finally got it out.

Before I removed it, I did the install, of course. Install was pretty straight-forward though involved a lot of windows and options that I didn’t know the right answer to. I just went with the defaults.

After installing it, confused Windows user took over. With Windows, any program gets installed in your Start menu. (Personally, I also have a folder called “Programs” on my desktop where I drag icons for programs I use, to avoid the mess the Start menu can become). I kept looking for something that corresponds to the Start menu on the Mac but had no luck. Where the hell was VMware?

Eventually, I clicked on the hard drive icon on the desktop, saw the applications folder and found it there. Then I wanted to make a shortcut to it, but right clicking seemed to be useless for anything. And when I moved the app, it MOVED the app, not created a shortcut. Windows people know that you never move apps. It screws everything up. I dimly remember now this not being an issue with Macs. But I put it back, anyway.

I right clicked again, then this time noticed the Make Alias option. Oh, yeah, that’s what Mac calls shortcuts. So I made one, which shows up the same folder, then moved it to the desktop. How annoying I couldn’t right-click drag and make an alias where I wanted it.

Time to get VMware going. Launching the app, it quickly told me that I needed to download the latest update. I did that, then ran the program. I got a screen asking what type of virtual machine I wanted. Since I had a copy of Windows XP Pro around, I went for that. VMware then asked for the software CD.

Problem. My version is an upgrade copy (I also have a full version but grabbed the wrong CD). Using the upgrade version meant the Windows XP Pro setup screen wanted to verify ownership of an old copy of Windows. On a Windows machine, you just eject the CD, insert the old CD, it looks and you’re set. But how to eject from the virtual machine? The Mac didn’t even know there was a CD in it, from the Finder!

Finally, I noticed a little CD option at the bottom of the VMware window that was running the install program. I told it to disconnect the CD. That let the Mac realize there was a CD in it, and I could eject. I inserted the old Windows CD that I had, got verified, then repeated the process to get going.

It was amazing to watch Windows install on my Mac, and I did a little jump when the Windows start-up sound came out of it. Weird! I then spent an hour or two running XP Service Pack 2 and connecting to update Windows with nearly 100 other updates. A pain, but it all went smoothly and on an automated basis.

Eventually, it was time to install Office 2007. But before I did that, I wanted to link to my network file server. From within Windows. Which, at first seemed impossible. I looked and looked, finally found this, suggesting you can’t do it. Bummer.

All hail Twitterdom. I twittered for help, and @stephenevans helped me out. If your Windows machine is maximized to full screen, reduce it and look at the bottom right corner. Find the network connection icon and switch to bridged mode. That should do it. I think I had tried this before but might have had firewall issues the first time. But trying again, I got my network drive and have been happy ever since.

I’m seriously using VMware now, a lot. See, as it turns out, my desktop crashed last week. So rather than hum along in Windows running on three screens, it was either the Mac or  fallback to my old Toshiba (since my still new Sony Vaio with Vista sucked so bad it had to go in for repairs).

Since the Mac is this new vast machine, I made the plunge — which is good since I have to use it anyway for a trip next week. I got tons of my key apps installed. Sure, I might move to Mac Office (and I’ll blog a lot more about what I could find or not find for the Mac to correspond to my trust apps. But using Windows was a no brainer — I know what I’m doing. 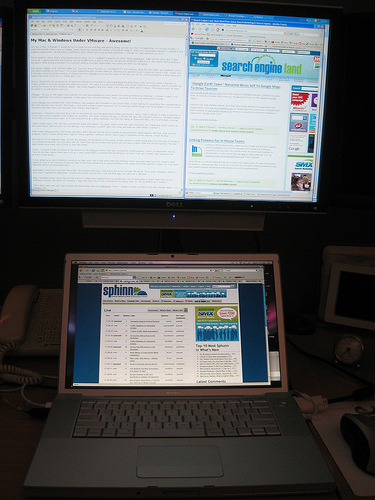 It works so well. I can’t say it enough. Right now, I’m using my widescreen external monitor to run the Windows virtual machine. I only remember I’m using a Mac when I forget about the stupid new keyboard shortcuts or the lack of a Del key (more on all this later; yes, I know, fn-delete and there are remapping tools). Down below, it’s Mac city — where I’m mainly running Firefox so far.

So I’m on the Mac but not really using the Mac side much. I’m sure I’ll get there. I actually do want to get there. But having Windows is a great security blanket, not to mention it’s fast and stable.

Now to figure out why my USB flash card reader wasn’t seen by either the Mac or Windows side. And how to share a folder on a Mac like a drive? And later on, I’ll talk multimonitoring a Macbook. Talking three monitors, none of this one single external monitor stuff.