I’ve used three monitors for about two years now, and I’d never go back. It all started when I bought a new computer with a video card that had two outputs, digital and analog. I used the digital for my new 17″ LCD, but I wondered if I could get an old monitor going on the analog card. So I set my old 20″ CRT to one side, plugged it in and was amazed at how I could expand my desktop.

Honestly, if you’ve never used a multi monitor setup in Windows, it really does feel like magic. Using the Settings tab of your Display Properties, you can choose to extend your primary desktop onto the other monitor. And then that’s what happens. You have a super big desktop, where if you pick up something, you can drag if from one monitor and drop it onto the other.

The only problem with using two monitors I found was that my neck started hurting from looking only ahead or to the right. I figured if I got a third monitor going on my left hand side, I’d be moving my head around in various directions, avoiding any pain.

The alternative, I suppose, would have been to have had two monitors right next to each other in front of me. But I disliked this idea, because then my main natural viewing area directly ahead would be gone. I’d always be looking slightly to the left or right.

My bright idea meant purchasing two more 17″ LCD monitors plus another video card, so I’d have three outputs in all. It was worth the money. I couldn’t believe how much more productive I was. In my middle screen, I could write. On one of my other screens, I could read about something new happening. And on my third screen, I could test out what was being described. It was fabulous.

I recently graduated to 20″ LCDs for reasons I’ll explain more below (along with twin Nvidia gaming cards, handy if I ever want to link them together and run them as a single super accelerated card for games. I’ll never do that, but it’s nice to know I can). Here’s how the current setup looks: 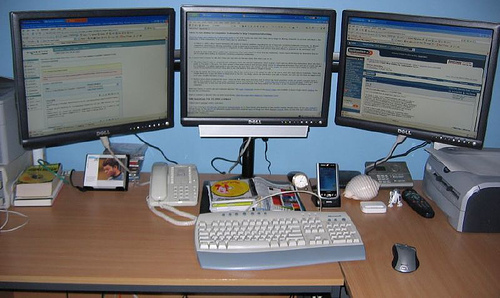 I quickly found I needed two more purchases to make things fly to really do well with a multimonitor setup. The first was Ultramon, which I’ve written about before. It allows me to have a taskbar for each of my computer screens.

For example, currently on my main central monitor, I have FrontPage open. I also have my Outlook email window open. Both show on my taskbar on the middle screen. If I select one of the applications, I can switch to it.

Without Ultramon, Windows stupidly would put the applications I have open on my left and right monitors also on my main central window’s taskbar (my Outlook Calendar, Firefox, Paint Shop Pro, a few others would all show up). That’s because my other monitors wouldn’t have their own taskbars. Ultramon corrects this. In addition, it makes it easy to shoot any application from one screen to another. For instance, look at this:

See the two buttons to the left of the normal minimize, maximize and close window buttons? If you click on the one with the little arrow, that Choose Monitor window pops up that you can also see. Then click on the monitor you want to send a window to, and it magically moves over there.

The other key element is a good monitor stand. I’m appalled at the state of LCD stands. The new 20″ Dell monitors I bought late last year can’t be elevated to the height to match my eyes for good viewing. My old 17″ LCD monitors were worse. After some searching those years ago, I ended up going for an Ergotron base, a DS100 Triple-monitor Desk Stand. They aren’t cheap.

NOTE: Aside from the Ergotron monitor stand, which I’ll describe further, here are some other stands sold via Amazon (and FYI, if you purchase via these links, I earn a little on the sale. The Ergotron link above also takes you to Amazon)

I love the base except for two key problems. First, there’s no storage on it. Moreover, it’s got this weird peaked shape. If you look at my picture above, you’ll see the junk I’ve piled on it. Each pile leans slightly downhill. I wish they’d just made the thing flat, so my stuff wouldn’t slide off.

More important, the monitors can’t be tilted naturally in the way I’d like. Look at this:

– sorry, the picture’s now gone from the Ergotron site –

OK, that’s from the Ergotron site and shows you how they think the monitors should be set-up. Look nice a pretty, all seamless, right? And I can make my monitors look this way. The problem is, while it looks pretty, it’s uncomfortable to view them. The left and right hand monitors can’t be viewed directly straight on. In other words, I can’t turn my head and be looking straight at one of the side monitors. I literally have to turn in my chair and lean slightly to do this, to get a more comfortable viewing angle.

Here’s a closer up example from my own setup, before adjustment: 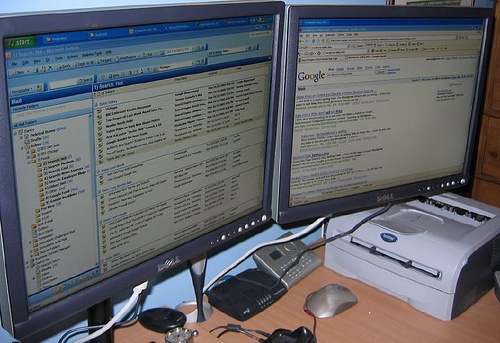 You should be able to see what a very slight bend the right monitor is on. It’s not tilted/angled in a way that both your eyes can look at it from exactly the same distance. Trying to look at it just isn’t comfortable. Now the monitors can be adjusted. You can set them up so that you can tilt them inward or outward from you, IE, adjusted horizontally. But look at this picture: 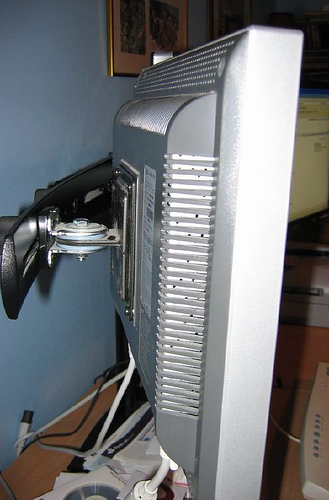 Notice how the top of the monitor leans more forward than the bottom? It’s incredibly annoying. Nor is there any reason for it to happen. These are standard VESA mounts. A monitor on them should be perfectly aligned between the top and the bottom. There should be no lean at all. OK, so why not just tilt the top back a bit. You can’t. The mount can either tilt horizontally or vertically, not both. Here’s an example with the vertical tilt setup: 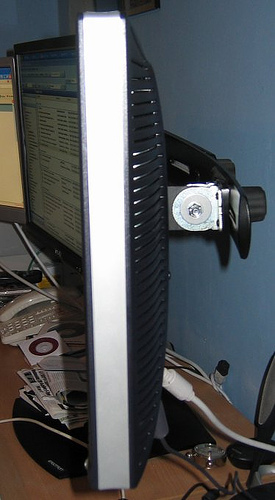 If you go with this, sure, you can make sure the monitor doesn’t lean forward. However, then you’re back to the original problem of the monitor not being comfortable to view because it’s not tilted properly toward you horizontally.

I contacted Ergotron originally about this, but they were no help. In the end, I figured it must be a problem on my end and solved it by using washers. I shoved a bunch of washers under the bottom part of the mounting plate to help adjust for the bad angle. It works OK, enough that I’ve lived with it.

A few months ago, I upgraded my monitors, as I said. I discovered in doing so that it wasn’t a monitor problem on my end. Once again, the monitors leaned forward. This is just a badly designed mount. I ought to be able to adjust in all directions, horizontal and vertical. At the very least, if the monitors are set up with the sliding-bow pivot you see here, then they certainly shouldn’t be tilting forward as they do.

It’s also not just me. I was visiting a friend in California a few months ago. She had a dual Ergotron mount and her monitors did the same tilting thing as mine, tilting forward at the tops. She was also just as annoyed as me. But also like me, she lived with it because overall the mount is good compared to the relatively few other choices that seem to be out there.

I did contact Ergotron a second time after getting my new monitors in place, but once again, there was no help. I’ve been meaning to write up this up to visually explain it to them, so maybe there will be more luck.

FYI, top of my tech wishlist? I’d like a laptop that has a second screen that you could unfold. Forget tablet PC. Give me a laptop with two monitors, one that you can swing out when you have extra space but fold away when on an airplane. Going back to one screen is so hard — a laptop like that would be awesome.