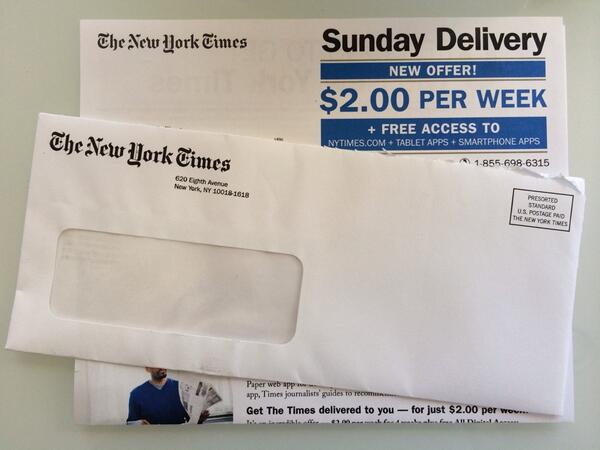 Quick — how much does it cost to subscribe to the New York Times? The answer is that to figure out what’s the best option for you likely involves firing up a spreadsheet, given the lack of transparency in how the New York Times prices things.

The New York Times is hardly the only publisher to hide the yearly cost of subscription behind attractive trial offers. But since the publication hit me with two different offers today — part of a regular stream I get every two or three weeks, it’s getting special attention from me in this post.

In 2011, I subscribed to daily print delivery of the New York Times through an offer that gave it to me for about $200 per year. But after the six month trial period expired, I balked at the $400 per year price tag it went up to. I canceled.

Since that time, at least once per month if not more, the New York Times keeps trying to get me back. I joked recently that it does with “A/A testing” with its offers, where after I reject one, it comes back with exactly the same offer, as if “try, try again” will work.

For those who don’t fully get the joke, marketers typically do what’s called “A/B testing,” where you show an offer (call it the A offer) to one group of prospective customers and a different offer (the B offer) to another. You figure out what works better. You may try several different offers, even, to improve your conversion.

With the New York Times, I can get exactly the same offer every few weeks. Yes, the offer will change in how it’s pitched and presented. There will be words like “New Offer” or “Welcome Back” or “Special Rate,” that try to initially hook me in. But the underlying pricing is no better than previously. So really, the offer hasn’t changed.

What someone at the New York Times ought to be trying to figure out is why I’m rejecting these offers. Take a moment to do a little market research. They’d discover that I’m rejecting them as too pricey. I don’t want to pay that much per year for home delivery of the paper, especially when I know that as a print subscriber, I’m actually more valuable to the paper’s advertisers (for the moment) than a digital subscriber.

I get that. But at the very least, don’t make me or any consumer have to produce something like this to figure out the basic cost: 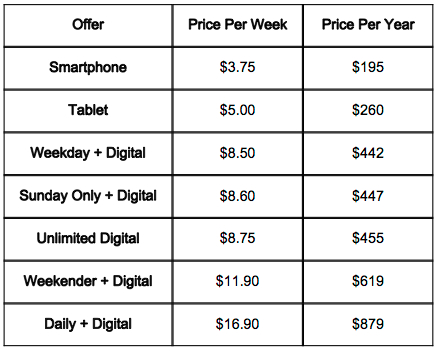 That’s a chart of all the New York Times main subscription rates, as best I can tell, for the moment. You won’t find anything like it on the New York Times site in places you might look, such as here or here, not that shows print alongside digital. It’s worse when it comes to the print editions, where you often aren’t told flat-out what the regular rate will be when a trial ends. Consider this: 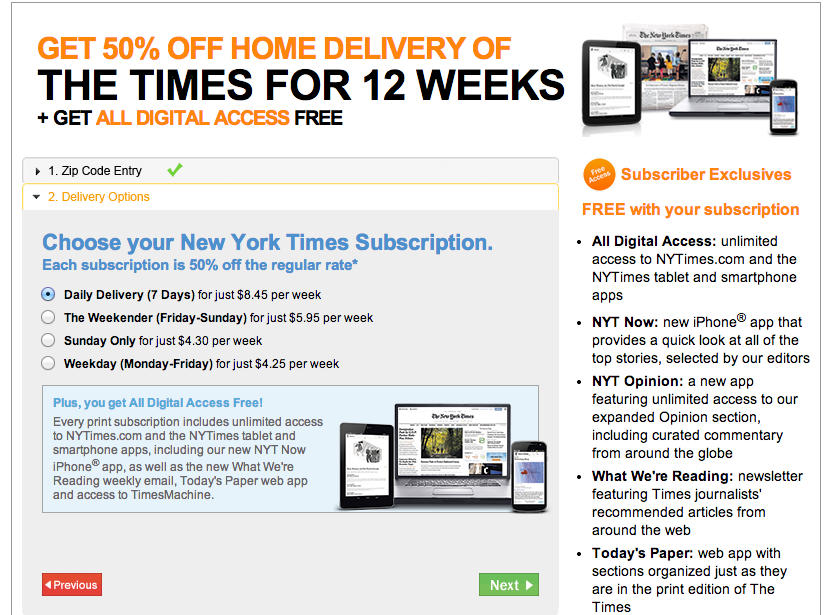 If you want to figure out the regular price of any of those options, after the subscription expires, you have to do the math. Sure, the math isn’t hard — but why not spell it out at least in the fine print?

That chart I listed above also exposes what I covered the last time I wrote about this topic — that if you want unlimited digital access to the New York Times (meaning you use both its smartphone and tablet app), you’re better off taking the print edition on a weekend or Sunday basis. You’ll save a few bucks.

Got that? The New York Times will actually charge you less for unlimited digital if you just get the dead tree version and throw it away.

That doesn’t say much about the real value of either the print or digital versions. They both must be overpriced if there’s an option where a copy can be printed each day, tossed on my doorstep by a human being and yet cost less than an all-digital subscription.

But then again, this is from a publication that seems to think “loyal” readers should pay it money while non-loyal users get everything for free. Consider this from from Denise Warren, the executive vice president for the New York Times digital products group, in a recent AdAge interview:

You can sample the Times’ core product — 10 articles a month — and you can come to us through search and social. So now you’ll be able to sample Opinion content, but if you want to drink deeply, if you’re loyal and can’t get enough of it, you’re going to be asked to pay.

Loyalty has little to do with all this. Those buying subscriptions are doing so, as best I can tell, for two reasons: stupidity and convenience.

I get the convenience part. If you do love the New York Times content, go to it all the time, it’s convenient to have a subscription. The app might make it easier to read what you want. It certainly saves you the hassle of the site’s leaky paywall, where regular readers probably don’t want to simply follow a link from social media or do a Google search to get around it.

But the stupidity part is also there — where the New York Times seems to assume people don’t know to figure out how to do math, to understand that when you give away a print edition with digital access for less than digital access, something doesn’t add up.