As the war of words ramps up between Google and some news publishers, the latest spin seems to be how “worthless” the traffic is that Google sends. In reality, the traffic probably does have value, but the newspapers are likely doing a terrible job of monetizing it.

I’ll give some examples in a minute, but how about an imaginary story to illustrate the problem?

Let’s say a newspaper executive opens a store. They put some story headlines up in their shop window.

Now one of those old fashioned newskids comes along. You know, the type that you’d see in movies selling papers on the street. Let’s call the kid Google.

Google reads the headlines and then scampers off down the street, shouting out to people things like “Senate’s debating health care!” or “1 out of 4 homeowners are in the red!”

Some of these people are interested. They ask this Google kid for more information, and Google sends them back to the news store.

At the store, the news exec owner greets visitors by asking them what the hell they want. Perplexed, they visitors say they heard about these stories and wanted to know more. The exec shouts at them. “Get the hell out of my store, you freeloader! This is for members-only. We don’t need riff-raff like you in here.”

That’s a hell of a way to run a business, don’t you think? But it’s pretty much how News Corporation execs seem to view the world. Consider what News Corp digital chief Jonathan Miller said earlier this month:

The traffic which comes in from Google brings a consumer who more often than not read one article and then leaves the site. That is the least valuable of traffic to us… the economic impact [of not having content indexed by Google] is not as great as you might think. You can survive without it.”

Today, we got similar remarks from James Moroney, executive vice president of A.H. Belo, which publishes the Dallas Morning News and other papers:

“This is traffic that’s not being monetized to any great degree,” Moroney said. “It’s akin to a person who drops into town, buys one copy of your newspaper and leaves town again and yet you spend a whole bunch of time building your business around that type of customer.”

Let’s be clear about one reason why these statements are coming out. This is round two against Google. In round one, some publishers said Google steals our content. Google’s response was that it sends them millions of visitors for free. So in round two, it’s time to make out like those visitors aren’t worth much. That’s especially important if you’re an executive who, after floating the idea of dropping Google, comes under attack as stupidly cutting your own throat.

Me, I see visitors as opportunities. This is the internet, where you can tell far more about a visitor to your web site than you can in print. You can tell:

And the “visitor” who buys your paper printed on a dead tree out of a newsstand? You can tell you sold a copy. And that’s it. That regular subscriber? You know they live in a particular area, maybe some demographic info, but you can’t custom your dead tree version in any way to target for that.

Can you imagine what would happen if the Wall Street Journal did a one time promotion where for a day, they gave away 1 million copies of their paper? Since there’s a real cost to doing so, don’t you think they’d figure out a way to make that promotion count? They’d sell special ads? They’d have a super attractive subscription offer?

But on the internet, where they’re not paying anything for all that traffic flowing from Google, there just doesn’t seem to be any effort. Millions of people are just written off as worthless. If they’re watching The Simpsons on Murdoch’s Fox TV network, they’re valuable. Put the exact same people on the internet, and suddenly they’re “net neaderthals.”

The problem isn’t with the people. They didn’t suddenly change when sitting in front of a computer keyboard. They don’t suddenly have less money. They aren’t suddenly less attractive marketing prospects. The problem is with how you’re targeting them.

Remember what Miller said? That most of these visitors read a story once and then leave? Well, clearly the WSJ has some analytics running to understand that. Someone, somewhere has churned a report to arm Miller with that information. But that same data can be used to target those visitors better.

Time for a real life example. Today, at lunch, in the hard copy of the Wall Street Journal that I pay $100 per year for, I read a story bout how 1 in 4 US homeowners are “underwater” or owing more than their homes are worth.

I guess I have at least $100 per year in value to the Wall Street Journal, since I’m a subscriber. But that’s gross revenue. Someone’s being paid to deliver the hard copy to my door. There are print costs involved with producing it. I doubt the $100 I pay per year covers all that. But the WSJ also convinces advertisers that I’m somehow valuable to them, which is why they pay to place quality ads in the WSJ like this in front of me: 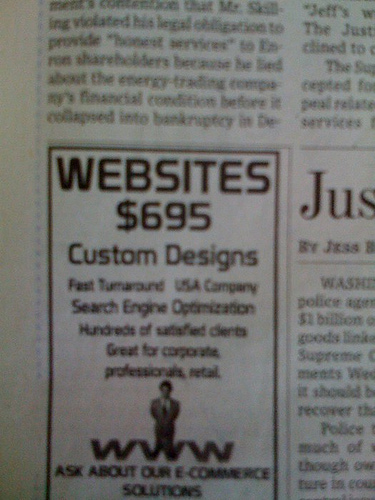 Now that same story is currently being featured on Google. The minute I click from Google to read it, I’m transformed. My $100 per year value is lost. Instead, I become one of those people who Miller says that he doesn’t make any money from.

Well, let’s see what I get: 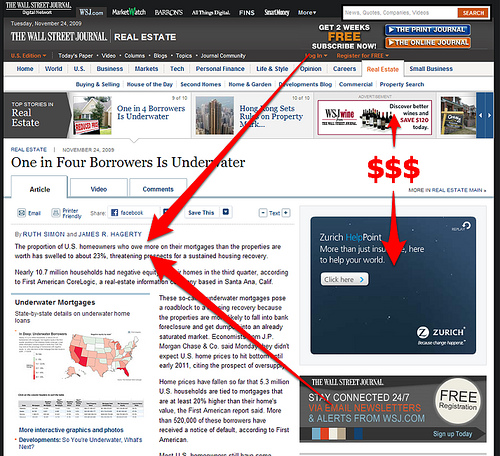 That’s the beginning of the story. It is EXACTLY the same thing I see if I read this story by clicking through to it from a link on the WSJ’s home page (they’ve made it free to anyone from there). It’s also the same thing I see when I’m logged in using my paid account.

Why is the WSJ treating the one-time / first-time visitor the same way as a regular reader? See those two big arrows I’ve drawn pointing into the story? I’m pointing out that one of the top goals the WSJ would have for  first time visitors is to get them to take that 2 week free offer to subscribe or to take one of the free “stay connected” via email or RSS options. And yet, these things are shoved off to the top and side of the page.

Place them in front of the reader! At worst, you lose nothing. But more likely, you’ve slightly interrupted one of those “freeloaders” in the same way you interrupt them when they watch News Corp TV shows and get commercials. And more of them will convert. They may buy more subscriptions, or they may register so you can do outreach marketing to them.

Meanwhile, money IS being made, even off the supposed freeloaders. There’s a big ad sitting there off to the site, plus another one right above. Oh, there’s too much ad inventory? Then find a way to convince your advertisers to buy more ads or pay more for them, which probably means showing that your ads perform well. And if they’re not performing well, fix your problem. Why aren’t they?

This is an article about mortgage owners being underwater. Can we assume some of the readers are attracted to it because they may want help with their mortgages? Are there no companies that offer this to type of service? Are there no ad execs who could figure out how to reach them?

Instead, I get served with an ad from Zurich about how to buy the right insurance for my business. Seriously? That’s the ad you show me? This is targeting? Roll out one of those “Get a mortgage for below 5%” ads that I see offline everywhere.

Even better, here’s another ad that also shows for this article:

Yeah, in an article about how people can’t afford their homes, you show me an ad about buying an “iconic residential masterpiece” in Boca Raton. And when I don’t click on that, because it has nothing to do with my interests, you call me a freeloader.

Your loss, I think. I’ve got money to spend. Plenty of your visitors do. You’re just not figuring out how to get it from me.

That visitor from Google? Show them a completely different experience, if you want. Article and ad, perhaps embedded within the content (labeled as ads, but inline, rather than off to the side).

Do something. Anything. Please. Survive. But there’s one thing you shouldn’t do. Blame others for sending you visitors and not figuring out how to make money off of them.