Sunday, August 11, 1996 – We’re in beautiful Prince Rupert, which is on the coast of British Columbia where we get the ferry through Alaska’s Inland Passage. We were supposed to camp here, but it looked like it was going to rain. I stopped in at the lovely Raffles Inn and talked them down to $40 Canadian, about $30 US, for a room. It hasn’t rained, but we’re not complaining. We have a big 27″ TV, after all.

We catch the ferry tomorrow afternoon, and I’m looking forward to someone else doing the driving. Actually, Lorna and I have been switching off pretty regularly. It’s great, because I break out the computer and never realize that 3 hours have passed by while I work out our budget for the next four months. I have one of those DC to AC adapters, a godsend since the computer’s battery is faulty and won’t hold a charge.

Today’s drive was pretty boring, up until the end. Mostly lots of fields, but the last 2 hours were along a glacial valley and looked a lot like Bergen, Norway. We also saw plenty of signs warning of wandering moose but no actual animals, to Lorna’s great disappointment. 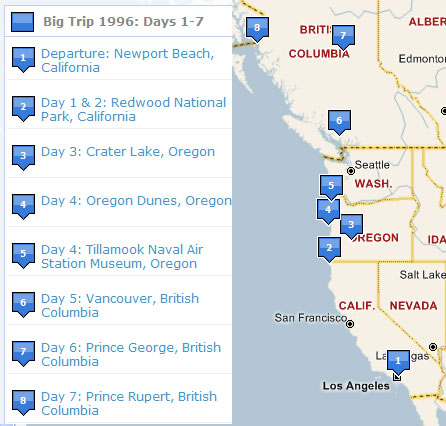 Tomorrow marks Day 8 of our great adventure. Day 1 [August 5, 1996]  took us to the Redwood National Park and the Northern California coast. We arrived there in the evening, then spent most of the next day [Day 2] exploring. That was nice, especially when we found some wild blackberries. I picked a ton and had them with my Cheerios. I felt like a real nature boy! 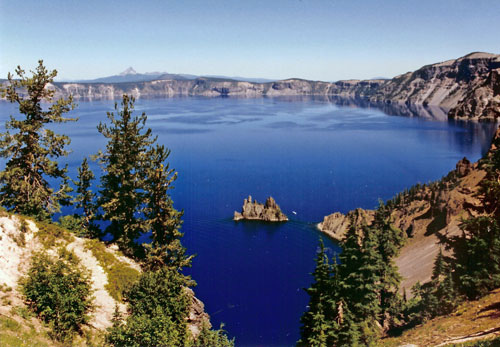 Day 3 [August 6, 1996], we were in  Crater Lake. It really is impressive, sort of like a liquid Grand Canyon in the way it can be hard to take it all in. We drove around the rim, which is the main thing to
do there, then headed to the Oregon Coast. 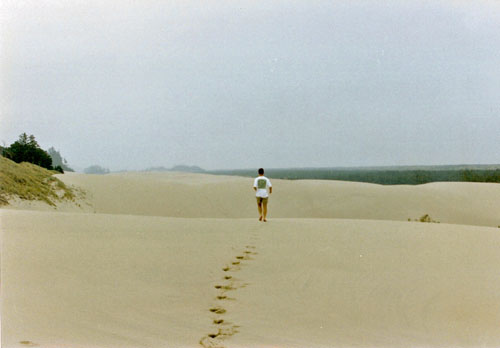 Day 4 [August 7, 1996] was a drive up the coast. We stopped at Oregon Dunes, which is like a little Sahara along the water. I rolled down a very large dune and felt like I wanted to puke afterward, but I was glad to have done it. We were going to rent dune buggies, but they only had one seaters and we didn’t want to spend $30 each and rent two.

We also discovered that A&W is alive and well up in the Northwest. Lorna and I stopped at a place so she could experience car hop service. They came out with our food and hung it on the car window. The only difference to what I remember as a kid was that the food was slightly smaller and there was no icy mug for my root beer. 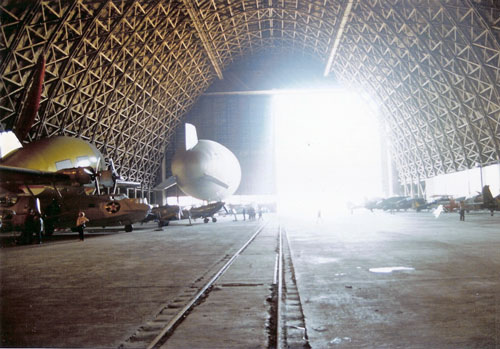 The highlight was Tillamook Naval Air Station, which was a former blimp base just like Tustin. Unlike Tustin, it’s now a museum. They don’t have a lot there, but I did get a great book to help me with the graphic that I meant to do before I left. Maybe I’ll do it in Australia.

The disappointment was the Tillamook Cheese Factory. We did the short, self-guided tour and then planned to scarf down cheese. Instead, we got a long line and a toothpick to pick out a small chunk of our choice. Then Lorna bought a banana split milkshake, expecting it to be like banana. It turned out to be
more like strawberry, and she hated it. She says she’ll never buy Tillamook cheese, now.

Day 5 [August 8, 1996], we were in Tacoma. We got there late the night before, and yes, Tacoma does smell a bit. Still, it was our first motel after several days camping, so we were pleased. On the other hand, I had a rewrite of the search engine article to do [I had a freelance assignment on enterprise search for NetGuide magazine to finish], so I was up until 6 a.m. I have my fingers crossed the editor likes it.

Actually, Tacoma was a bit of a shock after camping. We’re really quite organized with getting the tent up and being out there and enjoying it a lot. Being back in a city was a real shock back into urbanization. This was especially so as we spend the day driving up to Vancouver. Lots of traffic around Seattle. Ugh. The worse was getting to the Canadian border and realizing I never got some insurance card we’re supposed to have. Plus, a driver’s license isn’t accepted as proof of citizenship any more, and all I had was a copy of my passport. It turned out we had no problems, pretty much waived through. Still,
we have to cross the border twice more, once after leaving the ferry and heading through the Yukon Territory, then again when we return back.

Vancouver was weird! It’s a mixture of San Francisco, Seattle and Hong Kong, along with other cites. Pretty fitting for Canada, which seems a mix of the US, England and other places. We walked around an area called Gastown. We stayed in a real dive hostel. Actually, I would have loved it when I was traveling with Tom [backpacking trip in Europe in 1989], but I guess I’m getting older.

Day 6 [August 9, 1996], we drove to Prince George. There was fantastic scenery for the first half, as we drove through some spectacular mountains behind Vancouver. Then it flattened out as we joined the main highway. The best thing are the people. Everyone wants to have a chat with you, and I have to remind myself not to be in a hurry to push off.

That brings us to today [Day 7], the drive from Prince George to Prince Rupert. As I said, pretty mundane until the end. The ferry trip is supposed to go by some spectacular scenery, and we have a cabin, so we should be able to watch in relative comfort!

This is part of my Big Trip 1996 retrospective travelogue. See this page for an introduction to it and links to all other posts Next In This Series: The Inland Passage & Glacier Bay.