I’ve long promised to do a big write-up about my Microsoft MSN Direct SPOT watch, and I promise, it’s coming soon. I have a long plane ride coming up next week where I plan to get it done. But given the news of Google now giving mobile traffic information, I wanted to do a quick thing about how I get awesome real time traffic via my watch.

The Spot Watch gets information via FM radio in the US and Canada that Microsoft broadcasts. Each watch has its own identity code. After you buy one, you go to MSN Direct, register your watch, pick the information you want to receive, and it all starts flowing your way. Usually. My longer post will explain the many oddities. But let’s talk traffic, for now.

There’s a traffic channel described more here. For many metropolitan areas, you can have traffic incidents sent to your watch — accidents, road closures, etc. Here’s the fuzzy real life example from my own watch example a few weeks ago: 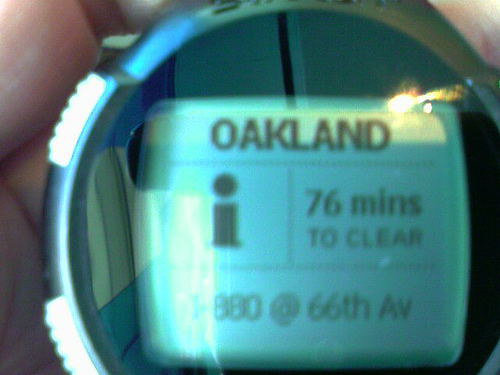 Incidents are fine, but what rocks are route alerts. You can create up to six routes that you want to monitor, for areas where route maps are supported. You pick a starting and ending location, then you are shown a map with various traffic monitoring points on it. Each route can have up to five monitoring points.

Each point you pick is shown on the watch face, with the current traffic speed underneath. The darker the dot, the slower the speed. Trend arrows also show if things are improving or not.

I’m often driving from San Francisco Airport to Google along the 101, so I whipped up quick route to give me the southbound traffic, picking five points along the way. My real-life example: 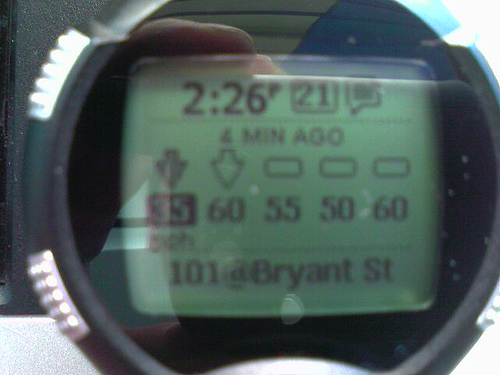 I was a bit dubious about how useful this would be. After all, who wants to mess with their watch while driving. But I was really surprised. Set the watch face to show traffic, and it’s very easy to glance at it as part of your regular scan of mirrors, windows, instruments, etc. For example (and pardon my hairy wrist): 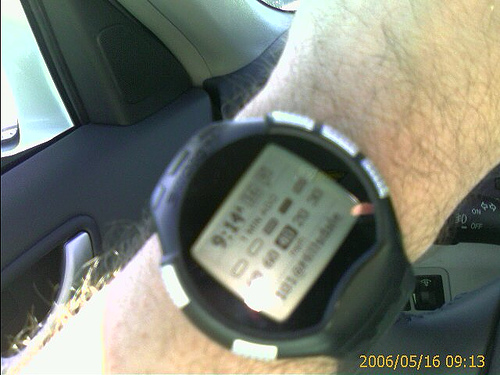 That’s a real life view of what you’d see driving along. Don’t worry. I was stuck in traffic stopped at the time — and the watch was accurate in telling me the rough speed for where I was.

There are better ways to get traffic on the move, I’m sure. But the watch was handier than I expected — and when I was leaving Google on that day, a quick push of the button told me what the northbound traffic was going to be like. Sure, I could do it via my phone, by going to a computer, etc — but in only a few seconds, my wristwatch gave me a fast update.

Postscript, Oct. 28, 2009: My watch ended up being more a fad for me. In the end, I found it fairly bulky to wear. As it also worked only when I was in the US (I lived in the UK at the time), I didn’t use it as much as I might have if I were in the US. And by the time I moved back to the US last year, getting traffic information via my phone (not to mention other info) was much easier. Clearly I wasn’t the only one to move on. Microsoft announced today that the MSN Direct service will close in 2012.