I’ve been flying Southwest Airlines for about a year now. It’s been quite a change for me. I spent years flying mostly long-haul international flights from when I lived in Britain to the United States. Now most of my flying is short hops between Orange County’s John Wayne Airport and San Jose. Southwest runs a bus-like schedule between the two airports, and I’ve fallen in love with their service plus learned a few tips along the way.

One of the best things about Southwest is the no fee policy if you have to change or cancel a flight. Can’t fly? You get a refund or credit for a future flight. No deductions, no fees — nada. It’s wonderful. It doesn’t even matter what class of Southwest ticket you book. At the very worst, if you don’t go, you’ll get whatever you paid in full as credit.

How fair is that? Super fair, considering that other airlines can charge fees in excess of the actual ticket price. I find it sad that JetBlue, which I love to fly for many reasons, charges an outrageous $100 change fee. Why, JetBlue, why!

The first two let you get a full refund on your ticket, if you can’t fly. They also allow you to change to another flight on the same day without having to pay any difference (if the fare has gone up, you’re safe).

Wanna Get Away doesn’t give you a refund. Instead, you get credit for future travel that lasts for a year. If you change your flight, you won’t get dinged with a change fee, but you will have to pay any difference between the fare you booked and the new one.

If you’re really worried you’ll never fly Southwest in the future, then booking either Business Select or Anytime fares makes sense. Personally, I wouldn’t pay the extra if a Wanna Get Away fare is available. These are typically half the cost of the other Southwest fares.

A huge culture shock for those new to Southwest is the boarding procedure. I didn’t get it, as first, and apparently I’m not alone. Southwest even has a Boarding School section of their web site to explain it more.

When it’s time to board, you line up. First, all the A1-A30 people arrange themselves in order in front of a sign with their group number. The A31-A60 people do the same. Then the A1-30 people board. When that line is clear, the sign at the front flips so that the B1-B30 group can line up while the A31-A60 people board: 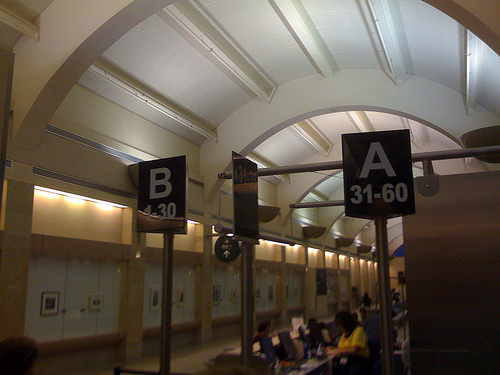 The process continues until each group has been processed. Behind the signs at the front are other signs that segment each group into fives, like this: 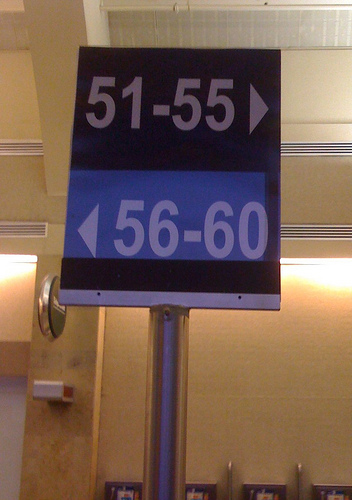 In the picture above, you can see how those with a numbers 51-55 stand in one section of the line while those 56-60 stand in another.

Crazy? I thought so, at first. Why can’t I just book the seat I want? A Southwest flight attendant told me the airline tested this, but it slowed down boarding. And I have to agree. Regular flyers know the system, line up religiously in correct order, then go aboard to get the best seats. It really works, better than any other airline I’ve flown.

What are the best seats? I’ll come back to that, but first the boarding pass tip. You want the lowest number possible, so that you go on first. The easy way to do this is to buy a Business Select ticket, which gets you early boarding (usually A1-12 boarding number) plus a free drink that never expires. I have about 30 of these now, and eventually I plan to buy an entire flight a drink.

Business Select is only $15 more than the Anytime fare, so if you want guaranteed early boarding, along with the ability to speed through security quickly in certain airports using the Fly By lane plus that drink, go for it.

Don’t want to spend the extra on Business Select? You can still get a high number with Anytime and Wanna Get Away fares. Just check in early, as soon as you’re allowed, online.

That’s 24 hours before your Southwest flight. Go to the Southwest site here as soon as you can in that 24 hour period and generate a boarding pass. The sooner you do it, the higher number you’ll get. Leave it late, and you’ll be in the B or worse the C group. No one likes the C group!

Don’t have a printer, such as when you’re traveling? Don’t worry. Check in online anyway and ignore the print screen. Then when you get to the airport, use one of the computer kiosks to check in again. It’ll see that you already have checked in and issue you a printed boarding pass — but since you checked in early, your original boarding number will be retained.

Another way to get a low boarding number is if you fly enough to become a Rapid Rewards A-List member. I’ve just earned this, and I’ll be curious to see how it goes. It means that Southwest is supposed to reserve “the best boarding pass number available — most likely an A” when you book a flight using your Southwest Rapid Rewards number.

I guess that means I don’t have to worry about printing my boarding pass as soon as possible. The “most likely an A” part worries me a bit, but I’m guessing that’s covering a case when someone might book a ticket just hours before a flight and when boarding pass numbers have already been assigned. We’ll see!

Now about those best seats. Most people want to avoid the middle seats. If you get a high number and board near the end, you’ll probably end up sandwiched between people on a busy flight. Board early, and you can get the window or aisle seat of your choice — toward the front of the plane, too, if you want to get off early. In addition, you’ll find plenty of overhead storage space. Boarding early is a plus!

Personally, I think seat 11E is the very best seat on the plane (here’s the SeatGuru chart to all seats on a typical Southwest Airlines plane): 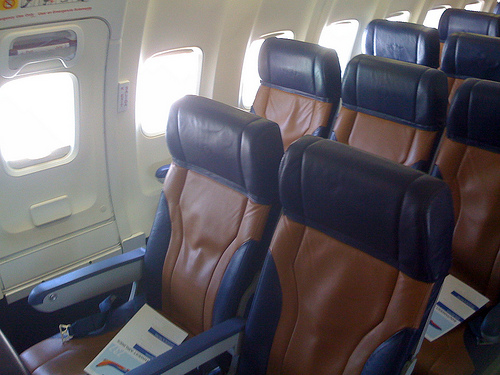 Seat 11E is the one to the left, closest to the window. Rather than the usual three seat arrangement, there are only two seats in this particular row. Where there should be an 11F seat right against the window, that’s missing, as you can see better here: 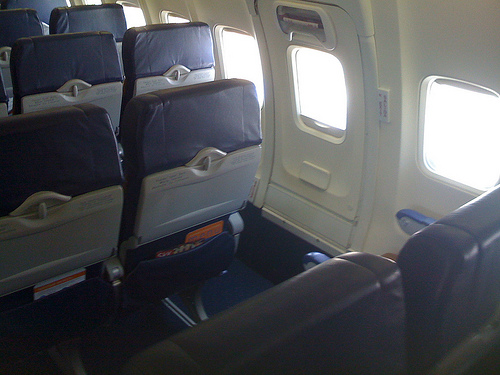 Technically, the storage space under seat 10F belongs to seat 12F. In reality, the person there rarely uses it. This is because they’d have to reach forward two rows to get to it. So pretty much, 11E gets to use that space leaving the space directly in front of 11E free for legroom.

That’s pretty much it. To summarize the key Southwest Airlines tips:

Finally, people take the lineup very seriously. If you’re A23 and stand in front of A22, that’ll get noticed by those around you. Line courtesy goes like this, as far as I’ve found. Walk to your general area when called, where you’ll be among five other people. Hold your ticket out so the boarding number can be seen and simply ask the others already there what number they are. Then everyone sorts themselves accordingly.

Also check out this post from Elizabeth Rose over at About.com for some additional tips, more about getting the best fares rather than getting the best seat, as I’ve covered. Southwest also has its own tips section here.

Postscript: A few days after I wrote this, Southwest announced a new Early Bird program that lets you book early boarding for $10. You don’t get a reserved seat, but you can get a lower boarding number without having to fly Business Select or being an A-List member.

Somehow, Southwest says it is keeping some numbers back for Business Select or A-List members before Early Bird people can get them. From the FAQ:

Meanwhile, I gained my Southwest Airlines A-List membership, and so far, it’s worked well. I had an A number in the teens (Business Select usually put me between A10-12).