The latest meme going around is what magazines do you read. Barry tagged me. This is a subject I can’t answer quickly. What magazines I read now leads into my long and involved history with magazines since I was a child, including lugging magazines across two different continents and the importance of plastic bins. You want to know what I read now? You have to read the entire
story.

I think the first magazine I remember reading regularly was Jack & Jill. Looking for this post, I see it is still publishing. Wow. It was a gift from my paternal grandmother, who I rarely saw, since she hailed from South Carolina — 3,000 miles from where I grew up in Southern California.

The magazines were great. As a kid, you live for mail. Who doesn’t live for getting something fun in the mail? But you know kids, we generally don’t write. Well, I didn’t. And if you don’t write, you don’t get letters. So getting a magazine once a month was exciting!

Being a fast reader, Jack & Jill wasn’t enough. I also consumed lots of Science Digest that my mother got each month. This prepared me with all types of knowledge that for a short period of time made me the smartest kid in school. That lasted until the inevitable move from my primary school to junior high, where the other smartest kids from all the other primary schools flowed in, moving me down the list. It sort of continued on like that through college. So sad.

By around fifth grade, Jack & Jill had been left behind. I’d moved on to books, as my desire to consume anything written grew insatiable. I also found science fiction, and with that, Starlog Magazine: 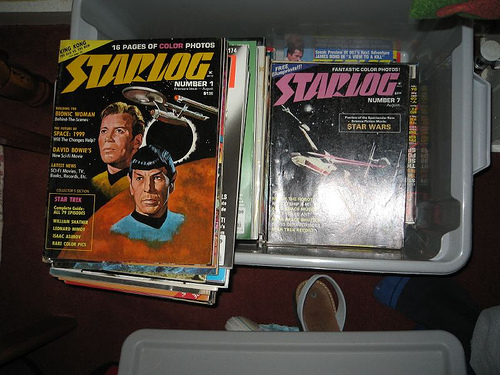 There are two of them above, the very first one along with the famous (in my mind) number seven issue, from when Star Wars was about to come out. Let’s zoom in on that baby: 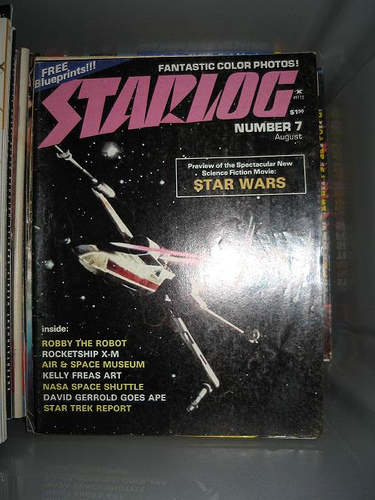 Hey, I’m sorry for the flash wiping out part of the cover. Been sort of busy at the moment, so I shot a few pics in a hurry. But I’m zooming in to highlight a minor side point in my magazine saga. Do you see what we were stuck with as sci-fi fans before Star Wars, as listed on the cover? Robby The Flipping Robot. Endless rehashing of Star Trek episodes written by David Gerrold or DC Fontana. For a kid, until Star Wars, sci-fi was locked in a time warp of B-movies, Star Trek, the incredibly boring 2001: A Space Odyssey as the “best” sci-fi movie out there (shut up — you know it was boring. You know it!). Then we got Star Wars, and the world began revolving once more.

Somehow, I was convince that Starlogs were going to become hugely valuable when I was older. Maybe this is because the back of each magazine listed how to order back issues — some of which were no longer available (my first was issue seven, and I bought the missing ones then stayed current going forward).

Hey, I am older now! And look, they still sell those back issues. Issue seven goes for $35. Issue one goes for $50. I have like 100
of these magazines. I should be rolling in it. Problem is, when I finally checked eBay a few years ago, what was selling there was nowhere near these prices. Here’s number 11, sold for $7. Here’s number 8, going now and no bids above the $2 starting point yet.

But back to being a kid. I started collecting these, along with a few other sci-fi mags. I think I kept with them all through high school. When I went to college, all those magazines when with me. Then they went from my college apartment, to my second residence, to another apartment in college — and another — then to several more as I kept moving when I was out of college and
working in Orange County.

A few years out of college, another magazine revelation happened. I’d been reading things like Spy and Atlantic Monthly as well as PC Magazine. But then Wired came out. Wow. I gobbled it up. My future, made cool, right in a magazine. I couldn’t describe it to other people, but the tech writer of the newspaper I worked for had a nice comparison. Vanity Fair for nerds.

As with Starlog, I figured Wired was going to be something else important to save. At this point, I hadn’t realized Starlog was worthless. The gene for collecting useless things in my family, which I’d inherited, strongly had me convinced. So from issue three onward, I saved them all.

As the magazine collection grew, storage became an issue. We didn’t have much space in our old house, so my “non-active” magazines had to go into the attic. The attic was yet and damp. That meant they needed some type of good storage container.

I have a billion storage containers at this point, because I tried all types for storing the magazines as well as lots of other stuff we kept in the attic. I finally found the perfect ones — roomy enough to hold two lots of magazines side-by-side and with a lid that rested completely on top, not allowing water to leak through (as opposed to those bids that flip open on the top. Water can make
it into the gap in the middle. This is important stuff, people!).

Just a quick peek. Someday, I’ll make time for a big special Wired Magazine project I have in mind. I’ll get out all the really cool covers, like these: 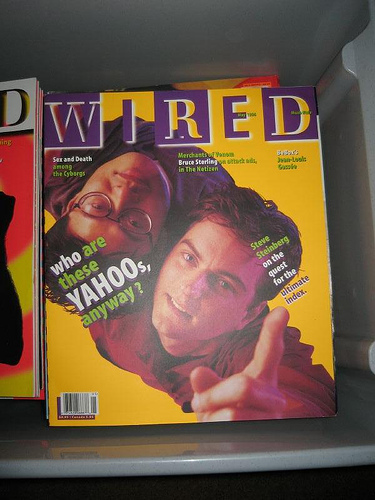 I mentioned Wired and Starlog aren’t the only magazines I’ve collected. I have some one-off grabs, such as these: 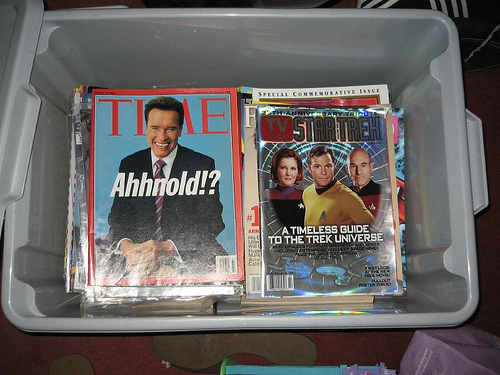 I also buy magazines of interest on a one-off basis — say a Nintendo games magazine, or one on laptops and so on. You especially have to understand. I live in like the magazine capital of the world. Or so someone once told me. Britain has magazines for practically every subject. And they’re everywhere. One of my favorite shops is Forbidden Planet, in London. Go there, and you don’t just get Starlog. You get magazines devoted to shows. Even shows no longer running. Pick your Star Trek series — there will be a magazine for it. Heck, pick your sci-fi series, it will have one.

You know how you go to a Borders or Barnes & Noble or some specialty shop and there have that big rack of specialty magazines? Every village in Britain has the same giant rack in the local “newsagent,” which is like a combination liquor store/newspaper stand. Heaps of magazines on all subjects being sold is commonplace. In our local newsagent, I can get magazines for train lovers (there are several), airplane lovers (again, several), even those who just love tanks. Tanks. Not military stuff in general. Tanks.

For kids, it’s fabulous. Our boys used to get a magazine devoted to Thunderbirds, a different one each Saturday. Now the oldest gets The Beano, which I can only describe as a sort of nice Mad Magazine. And there’s Bob The Builder magazine, or Pokemon
magazine, or …. you name it.

Back to my list. I put it in rough order of my favorites. Gadget stuff. Computer stuff. TV stuff. Wired last? Well, Wired is like work. After reading about tech stuff all day, it’s hard to think yeah, I want to read about this for leisure. Plus, the magazine is less fun than it used to be. There’s still the occasional good story, of course. There often that fantastic story. But there’s a lot of hmmmm, too. Plus, the endless stories that jump and jump and jump to the back of the magazine. It’s crazy. Full feeds versus partial feeds? Yeah, that’s going to get resolved when the jump or not to jump debate still goes on.

I’ve had more magazines over time. Even the few I’ve had build up. Storage has always been an issue. I used to use those paper magazine holders you’d get at Ikea. But then I’d run out of space, so I was constantly moving magazines out, storing them in various places — especially the tech magazines, not wanting to lose some review I might need at a future date.

These were habits of growing up without the web, of course. These days, lots of this content is online. Still, habits persist. I don’t want to toss the magazines out. If I do, I still want to flip through them and rip out key articles I might need.

Currently, I keep a bunch for easy reference in wooden holders (that you also get at Ikea and elsewhere), like this: 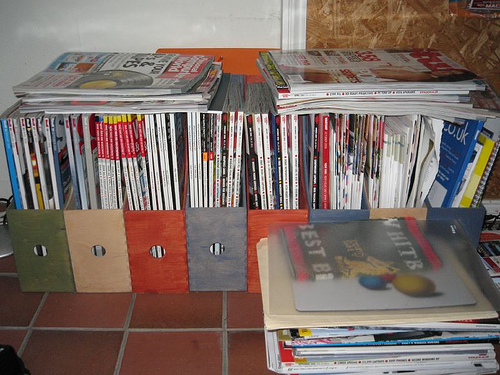 I’m behind on my filing, as you can see. When these are filled, I rotate out older issues and shove them behind my desk, where no one can see (you know, like the many people who often come into my office at home): 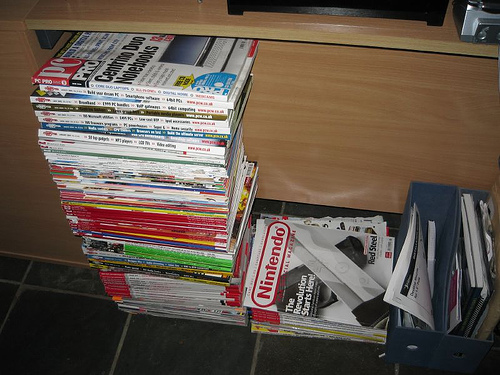 Eventually, I take a bunch of these to the local hospital. Why? Because I’ve had to sit at that hospital for various reasons over the years, and I hope there’s something for people to read other than Heat (a gossip rag) or (I kid you not) magazines from 1985. I figure some tech magazines, even if somewhat old, will still be a glimmer of hope to others like me.

I’m supposed to tag more people. Well, I’ve been off the feeds for two weeks, so I’m not sure who has been tagged already. So c’mon folks, you don’t need to be tagged. Just speak up about what you read!