The treehouse construction continues! When I left off, I’d decided it made sense to build a little porch for the tree house but worried it needed more support. Indeed. When I pulled at the cross beam I’d hastily put up, it came off at the bottom quickly.

Time to do it right! Last Sunday, marked my fourth day on the project, with the porch my starting point. I needed more 4×4 posts to serve as support, but I had no more. That’s OK — my book said to screw two 2x4s together, and darn if that didn’t work great! Then remember the saga of digging holes for my main posts? I didn’t need to go as deep, plus I’d discovered the miracle of the pickaxe. I quickly had 1 foot deep holes dug out. I set up the top crossbeams, snugged the poles underneath, poured that fast acting Postcrete and they were solid in 10 minutes: 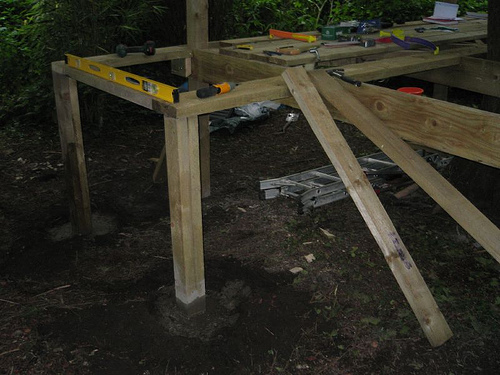 Naturally, I added diagonal cross braces. This time, I also had a circular saw recently purchased. Finally, I could cut the edges off the ends of the wood to fit easily. Oops. I discovered it cut through so easily because I’d marked the beam to go in flat — shallow — IE, so that it was only 2″ deep horizontally. That meant it was a heck of a lot harder to put the screws in on the ends. And when I cut the other beam the proper way, I discovered the circular saw didn’t cut deeper than my jigsaw — and it was a lot harder to handle.

Of course, there’s probably some way for me to properly angle the circular saw to cut the way I want. But now I’m sort of used to the funkiness of the jigsaw. I can get that wood fitting in fairly well — and did! I finished the cross bracing on the porch, plus on the remainder of the frame, then knocked off for the night.

Today, I played hooky. I worked a bit, but with it finally being sunny, I decided to do more construction and get the decking down: 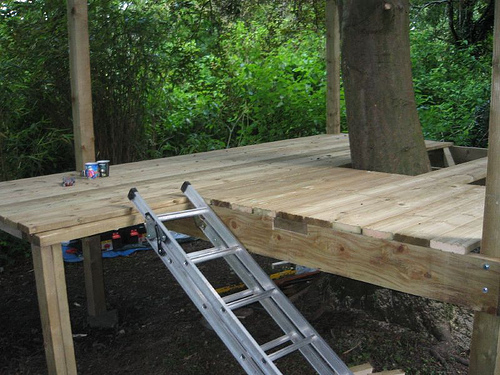 Originally, I tried to get exactly the right gaps between each plank of the decking. But you know, wood isn’t cut perfectly. And, well, turns out my frame might not be completely straight — or at least one of the cross beams in the middle isn’t. No matter. In the end, I kind of winged it with putting down the boards and spacing them out visually.

See the ladder above? Now picture that replaced with a ramp of decking to come, that the boys can pull up in case of attack. Now imagine they are secure but want to make a stealthy escape. That’s what the emergency exit is for: 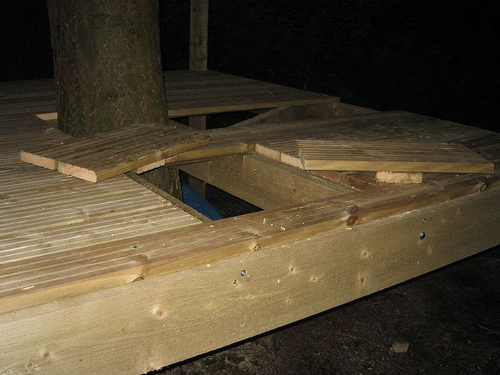 They can slip through that hole and jump down the three or four feet easily to get out from underneath the treehouse. Right now, I cobbled together two little lids. Originally, it was one single lid with two 2x4s linking the decking pieces. Turns out, that’s really heavy! In fact, it makes me think that ramp I eventually will build is going to be heavy. But I’ll cross that bridge (heh) when I come to it.

As a solution, I put some other decking remnants down the middle and removed the 2x4s. I thought when I was done, I’d still have all four decking pieces hooked together. But in a happy accident, the two remnants only covered two boards each. IE, when I picked up the door, it was in two smaller pieces. That’s fine — even lighter!

Here’s the deck with one of the doors in place: 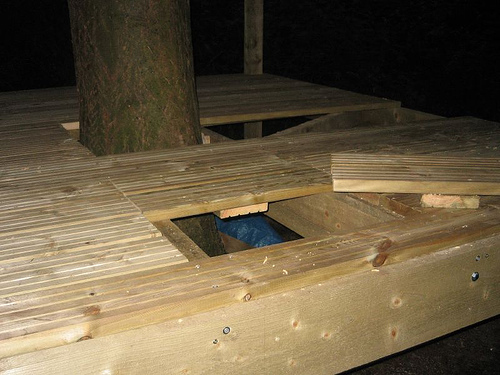 And both down, sealed up tight: 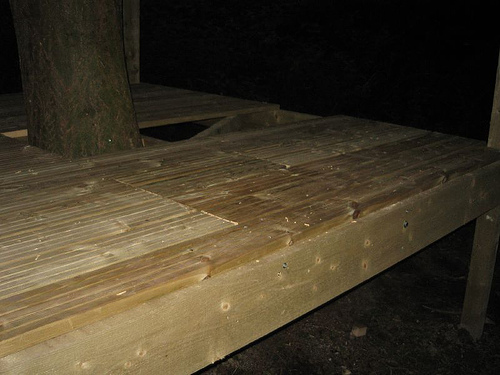 I’m going to staple some rope to the doors, so the boys can pull them off. I might make a better one later, but I mainly wanted something they could have fun playing with tomorrow. And that’s the first floor done, except for the gap in the middle right. I’m out of decking! I’ll order more, but in a few days after I get the walls up and realize how much more wood I’m short.

Before the walls go up, I have to get the second floor framing up. That means four 2x8s bolted to the 4×4 poles, lifting them up over my head. Even with help, I’m not looking forward to it. But at least with the 4x4s in place, I don’t have to do all the measuring out again. I’m semi-hopeful it will go quickly. We’ll see!