And the building a tree house project continues! Today, it was time to get the second floor frame up. With that in place, I’d have everything I needed to move along with the first floor walls.

Putting up the frame meant lifting six heavy 2×8 pieces of wood over my head, plus making sure they were level. For that, I needed help, so I drafted my wife into the project again.

Making life easier was the fact that the four support poles were in place, meaning that once I got the first beam leveled off and bolted in, the others would quickly follow, working off the angles of the first. The hard thing was that I could no longer stand on the ground. Instead, I had to balance on the edge of the first floor and juggle my hammer, drill, cordless screwdriver, bolts, level and so on. So my boys were drafted in to help hand things to me, as well!

I soon realized I wasn’t going to be able to drill my pilot holes then wrench the screws in quickly enough without the tiredness of holding up the boards causing us to slip and lose the level. Then it struck me. Nails! I got some of those big thick nails I bought and then never used, when I decided screws were more secure and easier to remove when I made mistakes. I got the board up,
level, then drove a nail under it on my side to keep in place. I moved to my wife’s side, drove another nail and voila — board temporarily in place. Now I could drill holes and drive the big bolts at my leisure.

Finally, the entire frame was in place: 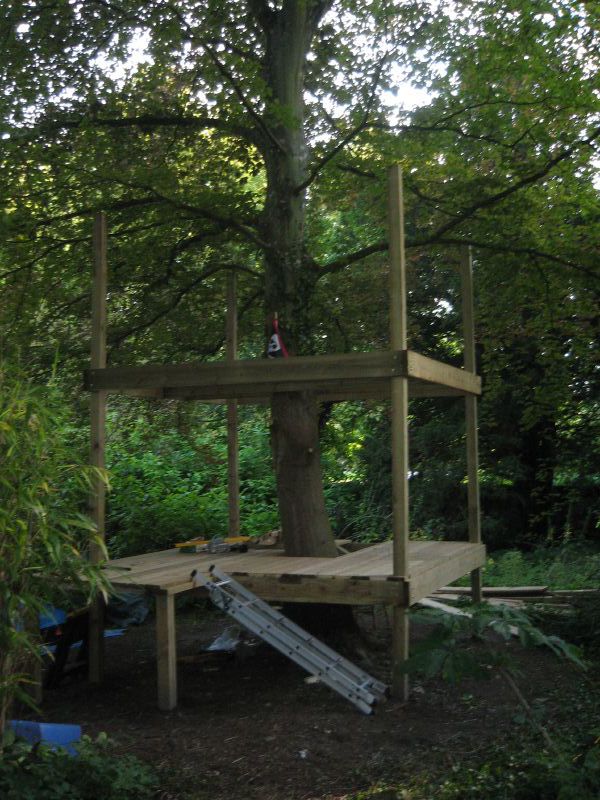 Sorry for the blurry picture, but you get the idea. When it’s done, adults (at least those of my short stature) will be able to walk around on the first floor without too much bumping of their heads. The second floor will be shorter, which is fine. It really should be a kids zone up there. 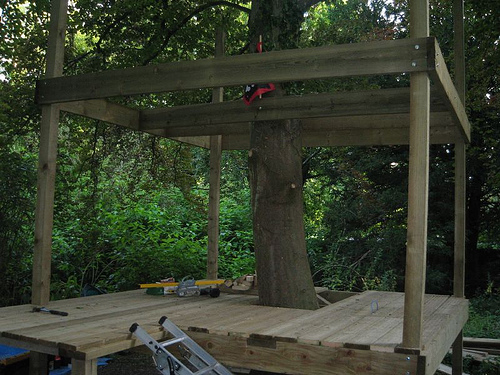 Despite the construction, the tree house already got lots of use, from Hot Wheels being raced to much stacking of wood remnants. The trap doors were especially popular, requiring me to quickly add some makeshift handles: 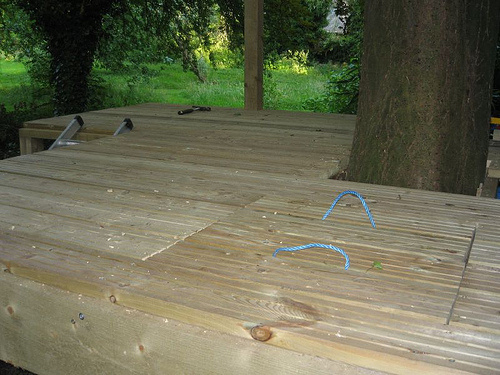 The boys really want hinges added, so you can pop up and have both doors swing open. Yep, eventually — but first, how about some walls?

The first challenge is that I don’t have near enough wood for the walls. I sort of guessed and guessed completely wrong. But I already need to order more decking, so I cut what I had to start figuring out how I’d frame stuff, plus which sides would have windows and how I was going to make the door work.

In the end, I decided to use 2x4s all around as a base for a frame, then I’m going to have vertical supports come up halfway on two sides which will open to windows. The back wall will be completely closed. As for the door, my book had no instructions on how to make that frame solid. Could I figure it out on my own? Yes!

I put down one 2×4 and screwed it to the floor. Then I screwed another on top of that. Then I ran a third 2×4 up vertically. At the bottom, I screwed it in to the base I’d built. At the top, I screwed through one of the second floor beams into it. And that’s it — a solid door frame! It’s also going to have a wall that comes halfway up, opening to a window.

Here’s where I left off: 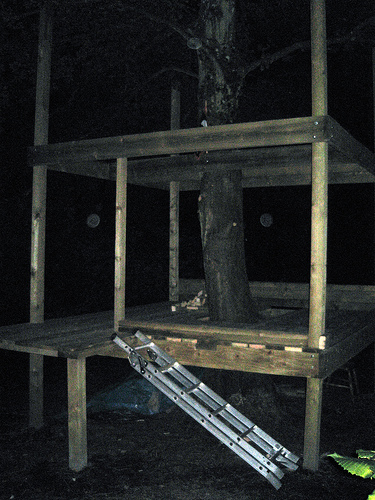 You can see the door frame, then way in the back, I even tried putting up some of the wall temporarily to see how it will work. You’re supposed to overlap the boards, but I found that hard – especially after my big halogen work light died when I decided to go a bit longer tonight and I was left with only the LED light in my cordless screwdriver. I might skip the overlapping. We’ll see.

Next up — finishing the wall framing for the first floor!