Wow — I’m getting email asking what’s up with the treehouse! Cool, that’ll keep me motivated. So it’s been raining in Britain. Sure, it always rains — but it’s really raining a lot. You know, floods all around. Fortunately, we seemed to be one of the few parts of the country with rain but no flooding. With the rain, there hasn’t been much construction. But I did have time on Sunday to do the flooring. Plus, I lowered the entire floor.

What a pain! But look, I climbed up and realized that if I made the first floor about 5 1/2 feet tall, the second floor would be only like 4 feet high. So I dropped the first floor frame by one foot. Wasn’t that bad — was I ever thankful I used screws, though.

That done, I put down some of the decking for a feel of how it would go: 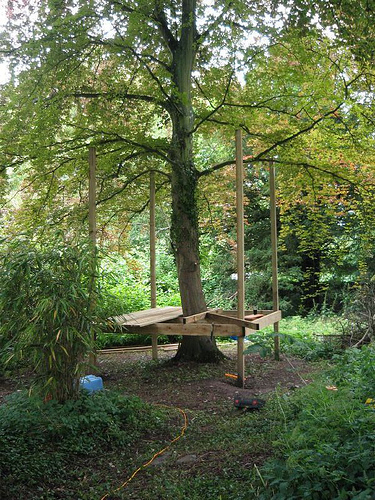 See how the decking sticks out over the edge. I got a great idea. Rather than cut all that, why not let the floor extend and form sort of a balcony? Then I could have a ramp up to it from the ground. Yea!

Before getting all creative like that, I had to finish the cross bracing. My book was all about the diagonals. It wanted diagonal bits of wood under the floor — and no gaps more than 16″ apart or, or, or….

Next up, just cut the ends of the wood to a nice diagonal line. Problem is, the wood’s like 4″ thick and my jigsaw blade is only 2″ long. Hmm. So I cut the wood and then flip it over to do the other side. Then I discover that jigsaws, at least the way I use them, don’t cut that level.

Resisting the urge to go out and buy a table saw or whatever (maybe this weekend), I get some rough cuts that actually work. Eventually, I have a pretty nice underfloor frame: 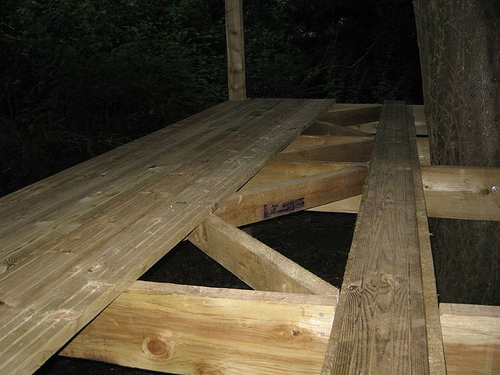 Well, at least on one side of the treehouse. But that’s fine. It meant I could put the deck down loosely, so the boys could climb up and play (and they did!).

I was a bit worried that they might walk on the part of the wood that sticks out at the end, causing it to flip up, since the boards aren’t screwed down. I thought all this as I stood on the deck all laid out, walking around and admiring my handy work. I walked right past the edge, in fact — and suddenly started to sink. It was like being in a movie. I very slowly dropped, turned to see what was going on and realized the part of the deck I standing on was rising up behind me. The entire village probably heard me yell an expletive as I jumped off quickly to save myself. Fortunately, the boards didn’t clobber me.

The day was well done when I took this last photo: 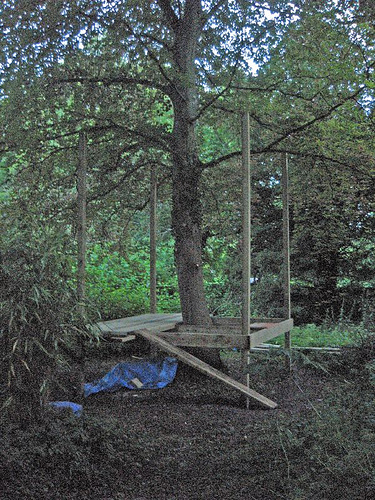 I have constructed some support for the porch/balcony part, but I’m not happy with it. I’ll probably cut some small poles and put the into holes with concrete. But the picture should give you and idea of what’s to come (with luck). You’ll walk up the ramp, step on to the porch, and then go through a door into the treehouse. And there will be a cable allowing the ramp to be raised.

One nice thing about the ramp is that the dog can come in, too. See, and no one even told me to think about the dog. Still doesn’t mean I love it, though.