All I wanted to do was share a funny “Downton Abbey Meets Spike TV” skit that was on Saturday Night Live this week. Unfortunately, there’s no authorized version of the sketch online from NBCUniversal. That made me hesitate, but apparently it wasn’t a problem for iVillage, an NBCUniversal-owned site. Nor was it an issue for Time, owned by internet piracy hating Time Warner. Come along. This is a sad tour of failure all around.

NBC: No Skit For You

You’d think the sketch would be available on the SNL site itself. You’d be wrong. Here’s what I see at the moment on the video page: 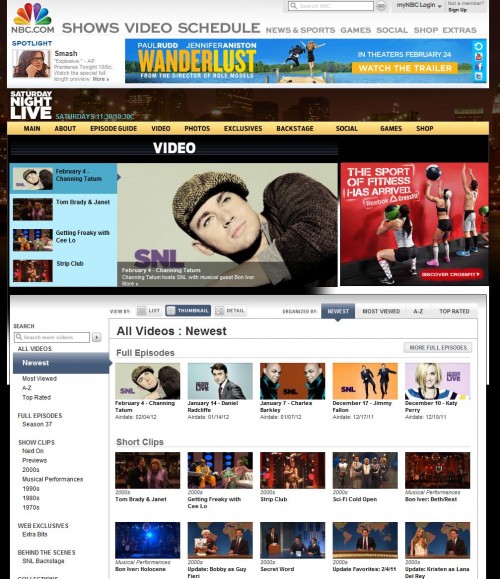 Hulu: No Sketch For You

Well, how about Hulu, which has the awesome ability to let you share particular segments out of a full-length episode. Here’s the “full-length” episode of SNL from this weekend at Hulu, with this message at the bottom:

Full episodes of SNL consist of material that is cleared for online streaming. Some sketches and musical performances may be omitted due to various restrictions.

As it turns out, the Downton Abbey skit appears to be one of those omitted sketches. I went through the episode that Hulu provides and couldn’t find it.

Is It Available Anywhere?

Oh dear. I’m unable to share that sketch legally, it appears. Or at least share it in a way that wouldn’t get challenged by NBCUniversal as not being fair use. You know, like this example that was put on YouTube: 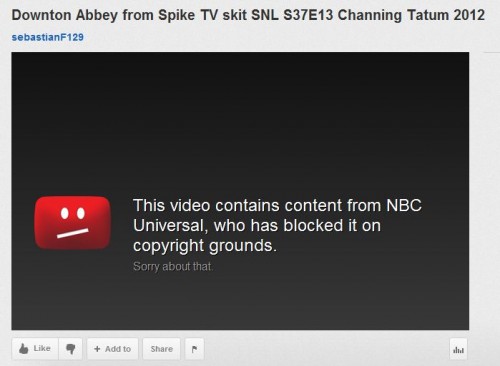 That, of course, hasn’t stopped others from doing so. Here are plenty of places the video is available, as found through Google Video: 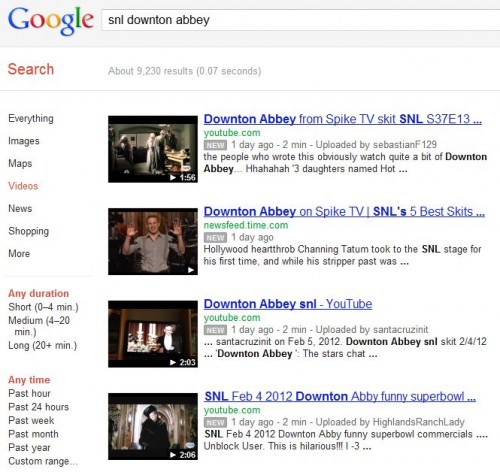 Time (Of Time Warner): We’ll Give It To You

Look at the second listing. See the URL, newsfeed.time.com. Yes, as in Time.com. As in Time, the magazine and online web site owned by Time Warner — which backed the SOPA anti-piracy bill. What do we find there? This:

There’s the skit! It’s not hosted by Time (of Time Warner) itself. Rather, it’s hosted on Google’s YouTube. Time is simply embedding the clip, on a page with Google ads at the bottom (those are the “Sponsored Links” that are showing).

So Time is helping support the same type of unauthorized posting of content that its parent Time Warner is concerned about — and happy to blame Google for — and doing all this while earning some money from Google.

More Media Outlets Will Give It To You

Hmm. If Time Warner-owned Time did this, could any other media outlets have done so? Yes. Here’s a short list:

iVillage (of NBCUniversal) Will Give It To You

Wait. iVillage is owned by NBCUniversal? You mean that NBCUniversal might be argued to have helped pirate itself?

You betcha. Here’s the page:

There’s the unauthorized video, embedded at the bottom of a story on an NBCUniversal web site.

But Back At NBC: No Skit For You

Hey, how about watching the skit as part of the full-length episode that NBC provides on its own site? It doesn’t appear you can do that, either. I’ve gone through it (and sat through the same “Star Wars: The Old Republic” ad about 10 times in doing so). That sketch doesn’t appear to be there. Why not? Apparently, it didn’t air on the West Coast — that might be part of all this.

Have you kept up with all the fail going on here? Let me recap:

Now Enjoy Until It Gets Pulled

Now go watch the sketch while you can, which was damn funny. Three daughters. One hot. One way hot. And the other one:

Postscript: See Why You Can’t See SNL’s Great “Game of Thrones” Sketch On NBC.com on AllThingsD for what likely happened to the SNL Downton Abbey skit — probably pulled over some rights issue. I did try for an answer from NBC, but they never answered.