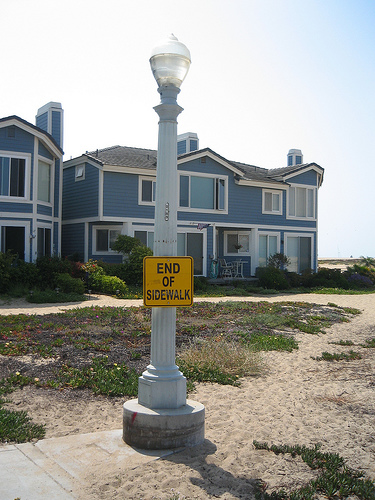 I’m a regular user of the Balboa Boardwalk here in Newport Beach, a three mile strip of concrete that runs along the beach and is used by walkers, joggers, bicyclists, inline skaters, scofflaw skateboarders and others. For the first time in years, the future of the boardwalk is being seriously examined. Should it be made pedestrian-only, due to safety concerns? Should a second boardwalk for those on wheels be constructed?

The OC Register covers how some residents spoke out last month at a city council meeting, asking for something to be done about speeding bikes and other fast-movers that can cause accidents. One suggestion? Make it only for walking.

Yes, it can get bad on the boardwalk. People can go to fast — plus on warm weekends and in the summer, it can be difficult to walk much less ride. Then again, when I flipped over my bike’s handlebars a month ago, that wasn’t down to speed — just someone who decided their dog didn’t need to be on a leash. It ran in front of me, I slammed my brakes hard to avoid hitting it, and down I went even at a slow speed.

So let’s not make it all about the speed demons. I can buy into an idea of a separate path for bikes, bladers and others. But there’s going to be a fight if they try ban non-walkers from being along the beach altogether. It’s one of nicest things in the world to rollerblade or bike along the water. It’s also far safer than trying to get from one end of the peninsula to the other along busy Balboa Boulevard. And with the local school being on the boardwalk, that also means lots of small kids might technically be banned from riding their bikes.

The city held a further meeting earlier this month to hear more concerns. I missed hearing about that — didn’t see an announcement in the paper that day, nor did anything come to residents in the mail who don’t live right on the beach. My suggestion for the city in the future is that it also put up notices on the boardwalk itself — where those who use it and are concerned about its future will be sure to see them.

I talked today with Tara Finnigan of the city’s public information office to get more information on what’s happening. At the meeting, a number of people expressed interest in being on a citizens advisory group to look at further options — what could be done to improve safety in the short term, long term, what’s affordable, what’s not. The goal is to have oceanfront home owners, home owners from back from the beach, homeowners associations, business owners, the police and others all involved. Recommendations from the group are to be reviewed at a public meeting this spring.

So, it’s all early stages. Interested in being on the committee? I’d suggest contacting Mike Henn, our councilman for the area.

I’m hoping the committee might take a broader view of the boardwalk’s future than just the safety concerns. One of the most disappointing aspects of the boardwalk is how it doesn’t run the entire length of the peninsula. In the north, it stops at 36th Street — leaving 20 more blocks of riding along the alleys before you can rejoin a beachfront boardwalk in Huntington Beach. In the south, it stop at the Peninsula Point neighborhood, meaning you have to ride through the streets to reach the renown surfing point of The Wedge.

My hope is that we might see the boardwalk extended — which will no doubt run into homeowners opposed to the idea. But if a separate path is built away from directly in front of the homes, perhaps that might be a fair compromise to public access to the beach and the homeowner issues?