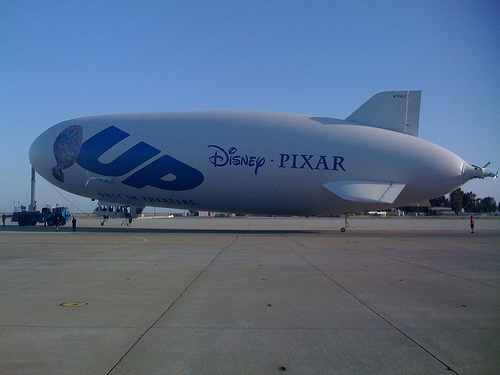 I’m back from watching the Zeppelin Eureka take off from Moffett Field near San Jose on its trip down to Southern California, where it will offer tours there for the first time. Below, photos and video of the zeppelin, some hopefully interesting trivia plus how you can track it on its journey down the coast via a Google Map — useful for those who want to spot it!

My Zeppelin Rides Come To Southern California! post has plenty of background you’ll want to read about Eureka and her current journey south. She left this morning from Moffett Field around 9am, for a trip that will take about 8 hours. She can do about 75 miles per hour, but I was told she’d be going only around 35 on the trip down, as there’s no rush to arrive sooner. By the way, she gets about 10-15 miles per gallon.

In the picture above, you can see Eureka’s decked out with a giant ad for Pixar’s “Up” movie that comes out this weekend. Talk about targeting. An ad about a movie featuring flying through the sky on an airship that flies through the sky. According to the press release (PDF), it’s the equivilant of 17 billboards in size.

When I arrived, Eureka was being unmoored and ready for a short “hop” test flight of about 15 minutes. I didn’t make it on in the end, as there wasn’t enough room. But that left me free to get some shots of the takeoff.

Here you see her linked to the mobile mooring mast: 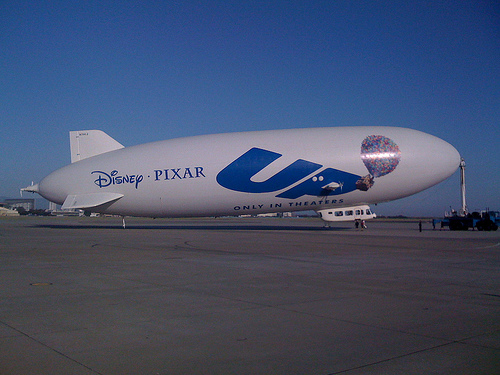 Brian Hall, who cofounded the company with his wife Alex, told me that the mast is all that’s needed to secure Eureka (and it goes where she goes, so it’s driving down to LA). Here’s a closer look: 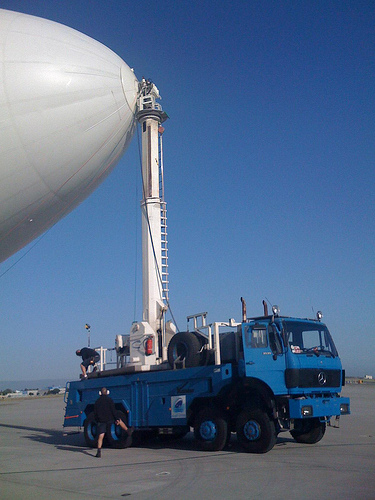 While Moffett Field has three huge hangars, what’s really attractive about using the field is all the empty space. Zeppelins need a lot of room to move around, as you’ll see in this video:

Still, Eureka does use Hangar Two at Moffett Field for special circumstances, such as when new ad decals are placed: 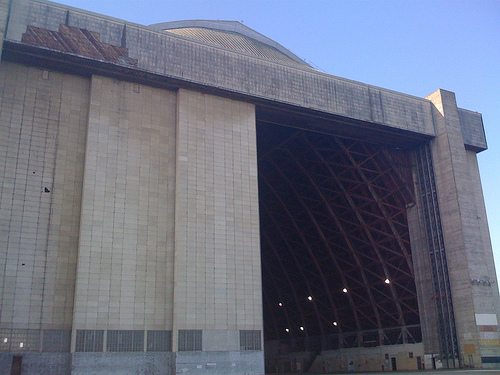 Hangar Two is one of the two twin smaller hangers at the field. The huge Hangar One was originally intended for zeppelins rather than the smaller ones that were used for blimps (see my earlier post for more on the difference). But Eureka is much smaller than zepplins of the past, plus Hangar One apparently has chemical contaminants that still need cleaning.

Here’s a closer shot of her nose: 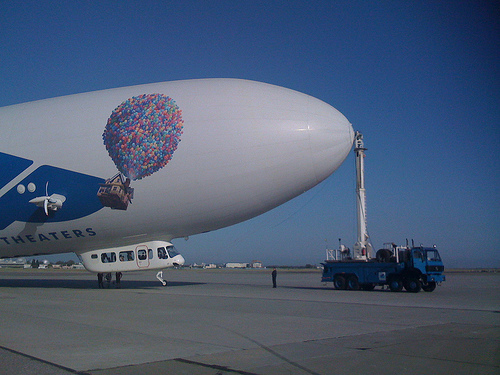 And some side views: 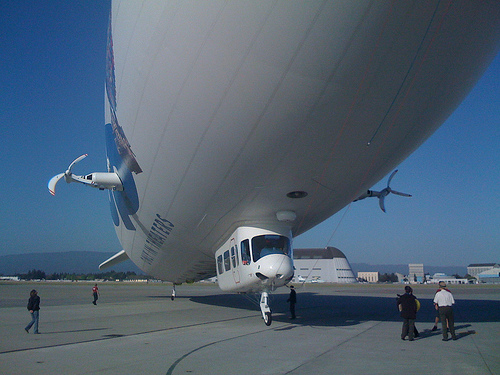 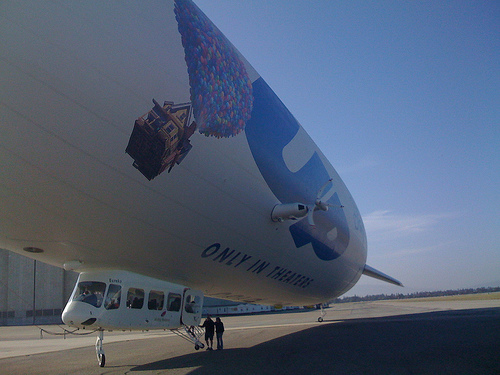 Here’s a clip of her dumping some water ballast:

Here she takes off for her short hop (note how the propellers can rotate upwards):

Here’s she lands from the hop:

And here she is heading off to Los Angeles: 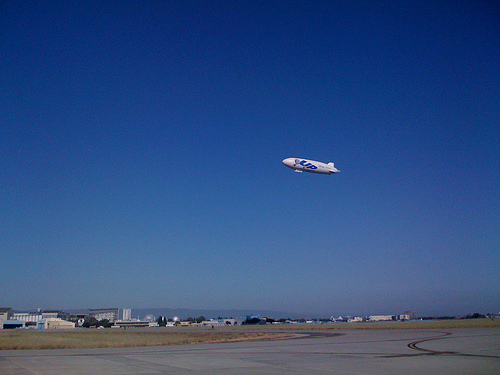 Video of her departure:

And her passing over Hangar One on the way to Southern California:

Eureka will be based near Long Beach during her time in Southern California. The company is considering future trips down south and possibly out of Burbank Airport. It will make a short stop there as some point during this current tour, so that airport officials can evaluate it. However, Hall said it might be too windy for airship operations.

This is a big trip for Eureka, but she’s been on longer — when she arrived in the US. Eureka’s an German immigrant. Built in Germany, she was shipped by boat from Hamburg to Texas. Her fin came off on that trip, but being a rigid airship, she pretty much came across as big as you see her now.

After arriving, she was then flown the remainder of the way. You can find the company’s blog posts here that describe the multistop journey more. One of the stops was in Arizona, where after the FAA certification people were trained by the company’s pilots on how the zeppelin works, the pilots themselves were then certified, Hall said.

Want to track her on the trip to California? Check out this live map here.

While I didn’t make it on this morning, I will be doing a flight down in Southern California. There’s also a chance I might be able to fly back up from Los Angeles to Moffett Field. I think it would be fun to live blog the journey with pictures and see if the power of Twitter could be used to do some flashmob turnouts along the way. Fingers-crossed.

Postscript: See My Zeppelin Flight With Burt Rutan At The Helm about my actual flight and details on the July 4 weekend, when the zeppelin returns to Southern California.